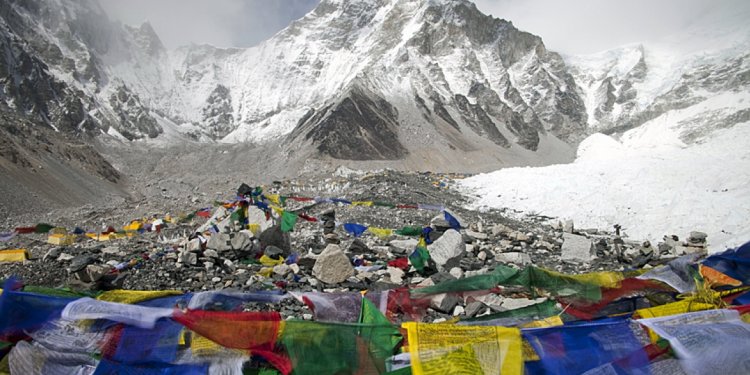 For many years, the most lucrative commercial guiding operation on Mt. Everest has been a company called Himalayan Experience, or Himex, which is owned by a New Zealand mountaineer named Russell Brice. In the spring of 2012, more than a month into the climbing season, he became increasingly worried about a bulge of glacial ice three hundred yards wide that was frozen tenuously to Everest’s West Shoulder, hanging like a massive sword of Damocles directly over the main route up the Nepal side of the mountain. Brice’s clients (“members, ” in the parlance of Himalayan mountaineering), Western guides, and Sherpas repeatedly had to climb beneath the threatening ice bulge as they moved up and down the mountain to acclimatize and establish a series of higher camps necessary for their summit assault. One day, Brice timed how long it took his head guide, Adrian Ballinger (“who is incredibly fast, ” he wrote in the blog post excerpted below), to climb through the most hazardous terrain:

It took him 22 min from the beginning to the end of the danger zone. For the Sherpas carrying a heavy load it took 30 min and most of our members took between 45 min and one hour to walk underneath this dangerous cliff. In my opinion, this is far too long to be exposed to such a danger and when I see around 50 people moving underneath the cliff at one time, it scares me.

Adding to Brice’s concern, some of his most experienced Sherpas, ordinarily exceedingly stoical men, approached him to say that the conditions on the mountain made them fear for their lives. One of them actually broke down in tears as he confessed this. So on May 7, 2012, Brice made an announcement that shocked most of the thousand people camped at the base of Everest: he was pulling all his guides, members, and Sherpas off the mountain, packing up their tents and equipment, and heading home. He was widely criticized for this decision in 2012, and not just by clients who were forced to abandon their dreams of climbing the world’s highest mountain without receiving a refund for the forty-three thousand euros they had paid him in advance. Many of the other expedition leaders also thought Brice was wildly overreacting. The reputation of Himex took a major hit.

After what happened last Friday, though, it’s hard to argue with Brice’s call. On April 18th, shortly before 7 A.M. local time, an overhanging wedge of ice the size of a Beverly Hills mansion broke loose from the same ice bulge that had frightened Brice into leaving Everest in 2012. As it crashed onto the slope below, the ice shattered into truck-size chunks and hurtled toward some fifty climbers laboring slowly upward through the Khumbu Icefall, a jumbled maze of unstable ice towers that looms above the 17, 600-foot base camp. The climbers in the line of fire were at approximately nineteen thousand feet when the avalanche struck. Of the twenty-five men hit by the falling ice, sixteen were killed, all of them Nepalis working for guided climbing teams. Three of the bodies were buried beneath the frozen debris and may never be found.

Although many news reports indicated that all the victims were Sherpas, the legendary mountain people who comprise just half of one per cent of the Nepali population, three of the sixteen were members of other, much larger ethnic groups: one was Gurung, one was Tamang, and one was a member of the Hindu Chhetri caste. All, however, were employed as high-altitude climbing Sherpas—an élite profession that deservedly commands respect and admiration from mountaineers around the world.

It was the worst climbing accident in the history of Everest, twice as deadly as the infamous storm in May, 1996, that killed eight people, the subject of my book “Into Thin Air” (four of my teammates accounted for half of that grim tally). But dying on Everest has been an occupational hazard for Sherpas ever since a team led by George Leigh Mallory to attempt the Tibetan side of the peak, in 1922, became the first mountaineers to ascend higher than the lower flanks of the mountain. In the final days of that expedition, seven Sherpas from Darjeeling, India, were swept to their deaths in an avalanche. Sad to say, the job hasn’t gotten any safer for Sherpas with the passage of time. According to a piece by Jonah Ogles posted on outsideonline.com, the death rate for climbing Sherpas on Everest from 2004 until now was twelve times higher than the death rate for U.S. military personnel deployed in Iraq from 2003-07.

There is no denying that climbing Everest is a preposterously dangerous undertaking for the members who provide the Sherpas’ income. But running counter to the disturbing trend among Sherpas, climbing Everest has actually grown significantly safer for Western guides and members in recent years, according to the available data. This can be attributed to a number of factors. Western climbers now use bottled oxygen much more liberally than they did in the past; many Western climbers now prophylactically dose themselves with dexamethasone, a powerful steroid, when they ascend above twenty-two thousand feet, which has proven to be an effective strategy for minimizing the risk of contracting high-altitude cerebral edema (HACE) and high-altitude pulmonary edema (HAPE), potentially fatal ailments that are common on Everest; and weather forecasts are much more accurate than they were eighteen or twenty years ago.

The reason the risk remains so much greater for Sherpas can be traced to several things. Sherpas aren’t provided with nearly as much bottled oxygen, because it is so expensive to buy and to stock on the upper mountain, and they tend to be much better acclimatized than Westerners. Sherpas are almost never given dexamethasone prophylactically, because they don’t have personal physicians in their villages who will prescribe the drug on request. And perhaps most significant, Sherpas do all the heavy lifting on Everest, literally and figuratively. The mostly foreign-owned guiding companies assign the most dangerous and physically demanding jobs to their Sherpa staff, thereby mitigating the risk to their Western guides and members, whose backpacks seldom hold much more than a water bottle, a camera, an extra jacket, and lunch. The work Sherpas are paid to do—carrying loads, installing the aluminum ladders, stringing and anchoring thousands of feet of rope—requires them to spend vastly more time on the most dangerous parts of the mountain, particularly in the Khumbu Icefall—the shattered, creaking, ever-shifting expanse of glacier that extends from just above base camp, at seventeen thousand six hundred feet, to the nineteen-thousand-five-hundred-foot elevation. The fact that members and Western guides now suck down a lot more bottled oxygen is wonderful for them, but it means the Sherpas have to carry those additional oxygen bottles through the Icefall for the Westerners to use.

Historically, more Everest climbers have perished from severe weather, HACE, HAPE, exhaustion, falling from steep terrain, or some combination of these hazards than from being crushed or buried in the Khumbu Icefall. This seems to be changing, however. Accurate weather forecasting has reduced the risk of being surprised by a killer storm like the one that struck in 1996. But the pronounced warming of the Himalayan climate in recent years has made the Icefall more unstable than ever, and there is still no way to predict when a serac is going to topple over. And Sherpas spend much, much more time in the Icefall than their Western employers.