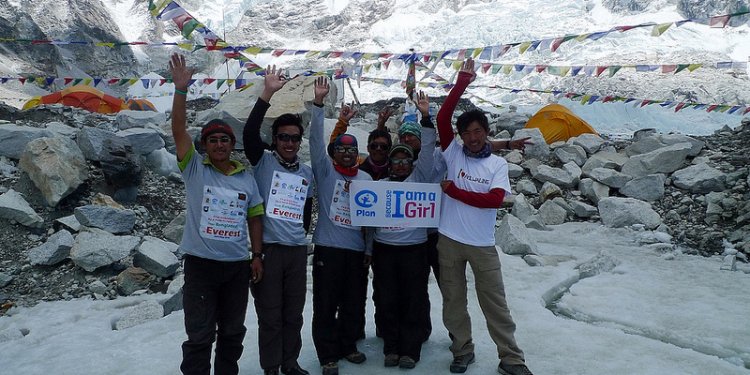 It might still be shorts weather, but the new movie Everest is about to cool things down real fast. The film is based on the 1996 Mount Everest disaster, in which eight people died while attempting the infamous summit. Everest stars Jason Clarke and Jake Gyllenhaal as expedition leaders Rob Hall and Scott Fischer, and Josh Brolin as climber Beck Weathers. Keira Knightley and Robin Wright also have substantial roles, but you'll notice that neither of them actually appears on the poster — and that's because neither of their characters were actually involved in the ascent. Instead, their characters are the wives of the climbers, who must come to their husbands' rescue when disaster strikes.

While this is certainly a noble undertaking, the fact that the movie primarily focuses on its men seems to underplay the fact that there actually were multiple women involved in the expedition. Instead, the female climbers' roles in the film are relatively minor, which doesn't quite pay tribute to how many women have climbed Mount Everest.

In fact, over the past 30 years there have been 418 women who have successfully reached the summit, according to the Himalayan Database. They have been from a wide variety of backgrounds, with different ages, nationalities, socioeconomic status, and reasons for attempting this incredibly dangerous feat. Here are a few names to remember:

This Japanese mountain climber was the first woman to successfully reach the summit of Mount Everest on May 16, 1975.

Malavath Purna was 13 years, 11 months old when she summited on May 25, 2014, making her the youngest female to successfully climb the mountain. What was your greatest accomplishment as a preteen?

The former professional volleyball player, who lost a leg in a tragic train accident, became both the first female amputee and the first Indian amputee to summit when she scaled Everest in 2013.

As if it wasn't enough to become the oldest woman to reach the summit in 2002 at the age of 63, Japanese Tamae Watanabe then broke her own record when she again conquered the mountain in 2012 at 73. DAYUM.

So while the movie Everest focuses more on the boys, the mountain itself has seen plenty of amazing feats by women. Climbers are definitely a unique breed, and scaling Everest is a remarkable achievement regardless of one's gender. Here's to hoping that future films will show some female climbers' stories (and hopefully ones with better outcomes)!