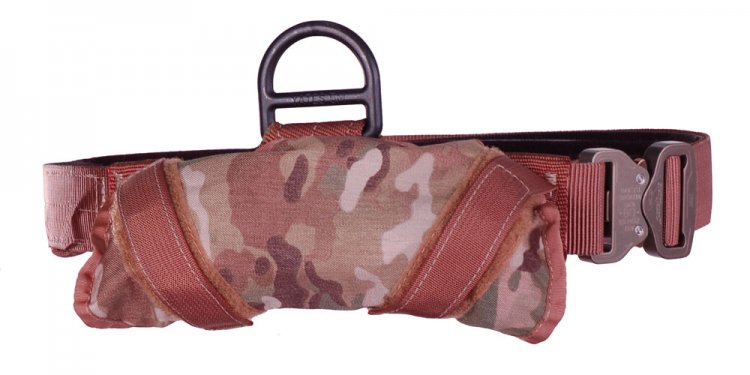 Comparison test of Sit Harnesses made by particular manufacturers - for eventual slipping a strap through the buckle (round the sit harness waist).
Singing Rock, 27.7.2001

When break of years 2000/2001, a mountain guide wintering in Chamonix advised dangerous circumstances on descending owing to a spontaneous slip through the buckle strung up the round waist strap. Thank only his experience no accident was happened and no drop from the harness was realized. He notified of using the SINGING ROCK Sit Harness provided with an older-type-buckle (yellow colour). The above buckle was applied to the sit harness series production till the end of 1999. The SINGING ROCK Ltd. have been starting to apply buckles of another type but functionally identical in the year of 2000 and are fitting them ever since. The reason for testing is to compare the various buckles used by particular sit harness manufacturers and, at the same time, to detect a risk of the spontaneous strap slip through the buckle by a current use.

The reason for our testing is to check the Climbing Harness Single Buckle functionality and bring an attention to a risk with respect to the undue laced through buckle and/or its fault stress, as well.

Our tests for the buckle strap slip were realized using harnesses of the particular manufacturers in order to compare the maximum of buckles acting on the same principle illustrated as follows (pic. 1):

The principle of buckle action shall consist in the self-locking effect based on the friction force resulting from an interactive pressure of the individual passing straps under load and buckle parts, the friction force being on the increase simultaneously with the strap carrying load keeps straps from their relative motion and with regard to the buckle. The friction quantity is in dependence on many other factors as might be the following ones:

Nevertheless, at a certain load (13 kN = 1300 kg on the average) the permanent buckle deformation and decrease of above-said friction are generally being set in and consequently the buckle slip shall come as a result.It is necessary to make note of a buckle 3-min."resistance" amounting to the force 10 kN (1000 kg) at a maximum slip of 20 mm following the EN standard and provided the due laced through buckle (see pic. 4 - Test No. 3).

Test No.1
Due laced through buckle under stress of its body towing force and an angle of 90°, unloaded strap with stitched buckle. We shall measure an unlocking force as much as is needful to unbuckling (when taking off unloaded harness). It is definitely impossible to unbuckle it under load, eg. on descending. (pic2)

Test No.2
Only one-way laced through - the load increase up to an absolute slip. There is the UNDUE laced through buckle in this case, which can occur in practice as a result of the climber ´s inattention and neglectful checking. The climber simply leaves to lace a strap through the buckle backwards and so leaves to lock the strap in position against slipping. CAUTION, HIGH DANGER! (pic3)

Test No.3
Due laced through buckle. The load increase up to an absolute slip. This is a standard buckle stress mode. Our tests proved (1 case excepted) the compliance of all harnesses excepting one with the EN 12277 Standard and the force needful to buckle slip round the waist was higher than 10 kN Standard requirement. The buckle was always deformed before strap slipping and the buckle permanent deformation could be always apparent by an only visual checking performed subsequently, especially the buckle middle crosspiece was deflected under down-stream action of the force. (pic4)

here are harnesses of the Europe ´s and USA´ s well-known manufacturers that were put to testing. Every one of the tested samples bought into Trade Network keeps the CE Mark.

Technical data of the tested buckles