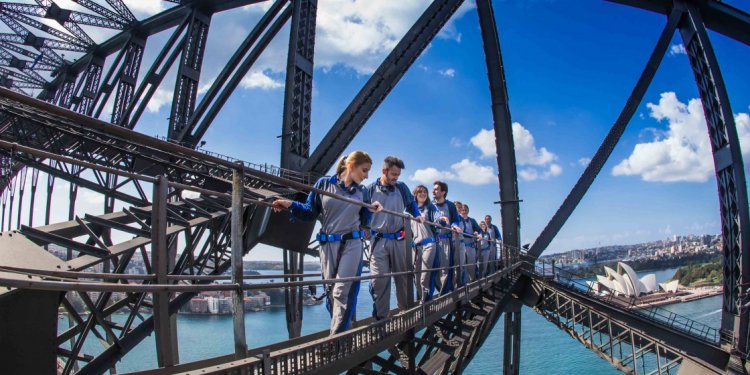 After that was out of the way we were all shuffled into another room and given some rather fetching grey jumpsuits to wear and advised to only keep our underwear on underneath. I looked like I was about to go and fix someone’s boiler and felt like I was about to sweat every last drop of water out of my body in the suit!

Next we were given attachments for our sunglasses and hats – everything taken up on the bridge has to be attached to your suit and once again we all shuffled into the next room. This time, belts were attached around our waists and, now wearing a heavy belt with a rain jacket and a radio attached so we could hear our guide on the Bridge, we all lined in front of two sets of ladders and a walkway so we could practice what we’d be doing on the bridge.

I was knackered after one round; what the hell was I going to do on the actual Bridge?

Collapse on a ladder and fall into oncoming traffic?

Become overcome with exhaustion and fall into the water beneath where I would be chewed up and spat out by the sharks circling underneath?

Nope; another heavy contraption was attached to our belts which meant that I’d be attached to the bridge for the entire climb.

A few minutes later, after I’d covered my nose in the free sunscreen provided (I’ve learnt from experience that even on the most overcast of days, my face still manages to get burnt) our tour guide announced that our hour long training session had finished and we would now be climbing the bridge.

I thought I’d feel nervous; shuffling into another small room where through the stone arch attached I could see the steel trusses of the bridge, but I didn’t at all. Scott had done his best to get us all pumped about our impending climb and it had worked – any thoughts I had about writing another Facing My Fears post had vanished.

I wasn’t scared, I was excited!

We all got in line and waited for Scott to attach us to the wire that we’d be attached to for the entire time on the bridge, popped our headphones on and we were good to go.

We stepped out onto a narrow walkway, wooden planks underneath our feet. We weren’t on the arch of the bridge just yet, we were filing one behind the other underneath the road where cars were rushing across to get into the city.

Suddenly the wooden planks stopped and I found myself standing on metal mesh. I could see the ground right beneath my feet.

Ok, now I was scared.

It’s ok, I reassured myself, you’re attached to the bridge the entire time. We squeezed through narrow gaps within the bridge’s huge structure, ducked under raw steel and rounded tight corners until we reached a set of a ladders just like the ones we’d practised on earlier and up we went, one at a time, until we found ourselves on the highest arch of the bridge.

I could no longer see under my feet. I wasn’t sure whether that was a relief or not. On one hand I was glad to feel completely safe and not be able to see the traffic and water beneath my feet. On the other hand there was a part of me that longed for that little thrill of being scared.

The arch was dotted with rivets; our guide, Scott, told us that when the bridge was being built these small, rounded metal mounds were the only things the workers had to use as steps. Not suprisingly, 16 workers were killed during the Harbour Bridge’s 8 year construction. Luckily, steps have been built into the arch of the bridge since then so we used those to slowly climb our way to the top.

During our walk Scott’s commentary was fantastic and we not only learnt some amazing facts and stories about the bridge and its construction but he also kept us entertained with his (sometimes really bad!) jokes.

We stopped every few minutes to admire the view and have our photos taken and then before we knew it we were right at the top of the bridge; 134 metres above the water of Sydney Harbour. The views were stunning and, after listening to Scott tell us about the landmarks we could see, we were able to stand up at the top for a while and just admire our surroundings.

I could see the skycrapers of the city sprawled to my right, the harbour stretching out in front of me towards Manly and the ocean and to the left the sophisticated apartments of Kirribili.

The tree tops of the Botanic Gardens and the Domain seemed to create a canvas of green above the stone walls of the harbour and the sun, which had thankfully replaced the drizzle of rain, reflected off the water below.

Ten or fifteen minutes later (it grew impossible to keep track of how much time we’d spent up there!) we crossed over to the other side of the bridge via a narrow walkway where cars and trucks zoomed pass beneath us.

We started our descent, this time facing the city, and climbed down three sets of ladders into the depths of the bridge below once again squeezing through narrow gaps and climbing through holes lined with yellow safety tape.

And then all too soon the corridor we’d used to get onto the bridge earlier came into view and we were all jumping from the metal walkway onto the concrete floor of the corridor so that we could say that we’d “jumped” off the Harbour Bridge!

No cameras or phones are allowed on the bridge so, after collecting our things from the lockers provided, we went to choose our photographs. Because we booked online we were also able to add on pictures at a discounted price and had chosen the CD option with 2 pictures on which, if bought on the day costs $35 but we got it for $30. We also received a free printed group photograph and a Sydney Harbour Bridge Climb hat.

I think it’s fair to say I won’t be wearing that in public anytime soon…..!

Overall the experience was fantastic but if I were to do it again I think I’d opt for a sunset or sunrise experience; the views were got were stunning but I know they’d be even better with the city lit up behind us or the sun rising in the sky.

Personally I think the photographs are the least value for money seeing as the price it costs them to buy a blank CD and upload 2 pictures onto it would amount to nowhere near $30 but it we wanted something to remember our Bridge Climb by and climbing it and not bringing home a picture of us on the bridge would have been disappointing.

The Sydney Harbour Bridge Climb was definitely worth the money but if you’re going to do book a climb yourself I’d recommend booking online to get the best deal.