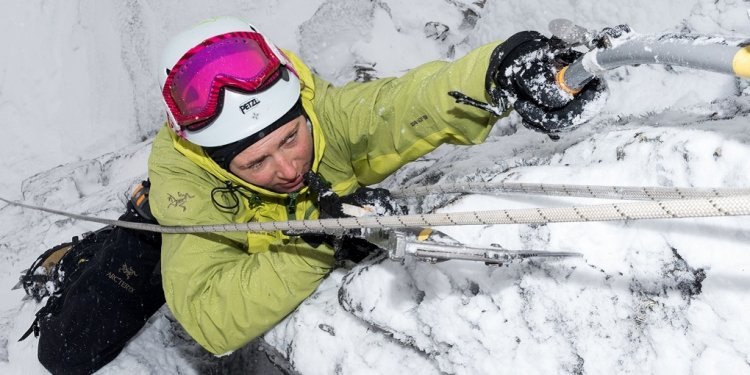 In the fall of 2014 I had been invited by some Chinese hosts to attend a presentation of films from the Kendall Mountain Film Festival world tour in Wenzhou (see my November 2014 blog posts). I was impressed at the numbers of Chinese outdoor enthusiasts that I met, many of whom wanted to learn to climb but had minimal options for getting any kind of instruction. It's easy to forget that in places like North America where we live, there is a long history of providing different types of outdoor education. In China they do not have that. Their parents or grandparents lived on the farm and it is a relatively new thing for young Chinese to have enough income to participate in recreational sports.

Afterwards I thought it would be fun to start an exchange and give some Chinese climbers the opportunity to come to North America and learn how we do things. We would also have the opportunity to bring some American and Canadian climbers to China to have an interesting cultural experience while giving some clinics for the Chinese and doing some of our own climbing as well.

Almost a year ago I got in touch with Daliu, a Chinese climber who I met at the Piolet d Or in Chamonix in the spring of 2012. Daliu was one of the judges at that event and I was there because our 2011 Saser Kangri II climb had been nominated for this award (see my April 7, 2012 blog post). Daliu and I started planning an ice climbing exchange where the American and Canadian climbers would come to China in the winter of 2016 and the Chinese climbers would come to North America in 2017.

In early February of this year, Americans Jens Holsten and Steven Van Sickle, and me plus Canadians Rafal Andronowski and Alik Berg flew to Chengdu. We were met by Daliu and our new Chinese friends who drove us the next day to Siguniang National Park to spend about ten days ice climbing in the Shuangqiaogou Valley.

Chinese members of our group


We stayed at a lodge in the Shuangqiaogou Valley run by a Tibetan family that provided all our meals. There is a road in the valley that is closed to normal traffic and each morning we would get picked up by our driver who took us where we wanted to climb that day. When we were finished climbing we called him on our cell phone and he would come back to get us.

Our lodge and vehicles to take us climbing for the day. There are a couple of ice climbs behind the lodge.

Our driver Li Yun Long and his family in Shuangqiaogou valley

The first three days we gave clinics to the dozen Chinese ice climbers who were part of our group. Language was a significant barrier since we didn't speak Mandarin and only about three of the Chinese spoke English well enough to translate. What we learned right away is the Chinese like to go out in big groups and it didn't seem to bother them that much to drop ice on each other. We had a hard time explaining that when we go ice climbing, we go in small groups of two or three. If we find other people where we want to climb then we leave and go someplace else because falling ice from other parties is dangerous.

Eating in China is the only place I have found that I either love a particular dish, or it is just too weird for me. I enjoy most stir fry plates, veggies, steamed breads, soups, and lean meats. But I usually pass on things like snails, fish heads, insects, pork fat and other mystery meats.

Mystery carcass hanging outside a restaurant

We learned a lot about how to demonstrate ice climbing technique rather than trying to explain how to do things through a translator. Raf suggested we solo next to our Chinese friends on easy ice close to the ground so they could copy what we were doing. We also spent time explaining how to set up top ropes and arrange a practice area so no one got hit by ice. We tried to point out that it was bad etiquette to ice climb above a slower party and knock ice on them.

Most of our Chinese students had been to an ice climbing course taught by Chinese instructors. There isn't a system for guide certification in China and from what we saw, the capabilities of the Chinese instructors varied considerably.

We did Q&A during our clinic lunch breaks and we would get questions like, "My teacher said I should kick my crampon into the ice four times before I stand up on my boot. Is this true?", or "My teacher says that when I'm leading I should place an ice screw every 3 meters. Is this true?" These kinds of questions, coupled with other discussions we had with our Chinese friends about family and lifestyle, revealed an interesting observation. Compared to us, they seemed more apt to be told and then comply with specific instructions from people in positions of authority. Our response to these kinds of questions was usually an explanation of how to make an assessment of the situation and then use our judgment to determine a course of action. It seemed like a different concept to them which made the cultural differences on this subject seem vast and complicated.

Jens and Daliu trying to explain difficult things like technique, etiquette, and judgment

After three days of clinics we started to go out on our own, or with just a few of the better Chinese ice climbers in our group. The temperatures during the day had been above freezing, but because we were at about 12, 000 feet it was cold at night. This meant that ice climbs getting a lot of sun were baked, and freestanding ice columns seemed too fragile to climb on. But it was fine to climb larger ice flows on the shady side of the valley.

Heading for a nice looking pillar

Unfortunately, with the warm temperatures, even some of the ice on the shady side was running with lots of water!


Most of the Chinese climbers are doing easier routes so if we got on anything harder than WI4+ or so, the ice was not hacked out and in better shape than most late season climbs in North America.

Two of the nicer climbs we did

This pitch didn't have pick holes from previous ascents


My friend Amanda, who hosted me and some other friends for the Kendall Mountain Film festival 18 months earlier, came up to Shuangqiaogou for a visit, Jens and I took her ice climbing.

Amanda is up for anything that looks fun

Amanda took us for lunch at a Tibetan restaurant far up in the Shuangqiaogou valley that made delicious fresh baked bread.

Amanda with the restaurant matriarch


Given that ice conditions were not that great, Alik, Steven, and I spent a couple of days walking up the Changping Valley, which is the next valley east of the Shuangqiaogou. We wanted to look for ice climbs to do in the future and for potential summertime alpine climbs. To some degree we had all succumbed to a bad cold and Jens and Raf were not feeling well and had stayed behind in the Shuangqiaogou Valley to recover.

Hiking the first several miles in the Changping Valley was on a boardwalk with interesting signs.

"The stone is unmerciful and please remember never to climb!"

The summit of Mt Siguniang (6250m) is in the clouds. The skyline ridge on the left was climbed by Dylan Johnson and Chad Kellogg in 2008

Alik crossing a bridge in the Changping Valley

Yak after a snowstorm


There is a 14, 000 foot pass between Siguniang Park and Chengdu and the snowstorm that hit when we were trekking in the Changping Valley also dumped a lot of snow on this pass. They don't plow this road so everyone must fend for themselves. On our drive back I was pretty surprised to see the kinds of buses, trucks, and small cars that head up over this pass that can be pretty dangerous in the winter.

We had a great time with our Chinese Hosts and we are looking forward to their trip to Canmore Alberta in the winter of 2017!