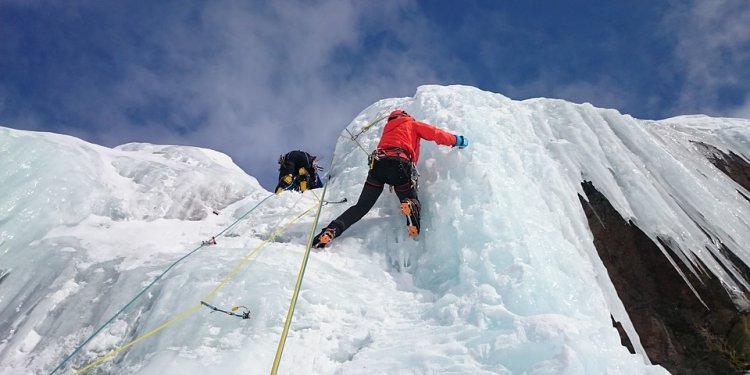 The core technique used for climbing steep ice is called front pointing. There are four main elements used in this core ice climbing movement technique. Combined together they allow the climber to move efficiently up their chosen ice climb.

All the elements are combined together using Agility, Balance and Co-ordination or ABC* which are defined as:

*Based on the FUNdamentals Of Climbing

At the centre of efficient ice climbing technique is the Triangle Position (Fig 1 and 2 shown below). This is the start and finish of a simple movement sequence involving the climber placing their ice tools and crampons. The climber's centre of mass (CM) is the 'glue' that binds the crampons and ice tools together and it's essential that the climber's CM is at, or close to the centre of this triangle to avoid the climber 'barn dooring' on steeper ice. To begin I'll discuss the overall movement pattern then analyse each discrete section.

I should stress that this is the core movement pattern. In practice you will find that this pattern has to be adapted to suit the ice conditions (brittle ice vs plastic), nature of the ice (featured vs uniform sheet) etc. But I would suggest you need to have the basic pattern sorted before you can adapt it for the many and varied conditions you are sure to encounter when climbing ice.

That proviso aside we'll look at the individual components in detail.

As in rock climbing, good footwork is the key to success in ice climbing. The more effective you are with your feet the more you will reduce the load on your arms thereby preserving the energy in your arms.

You can use your crampons in several different ways. You can kick the points into the ice such that they bite securely or you can place them on any edges, pockets etc in the ice. Similar to how you would place your rock shoes on rock edges.

When placing your points into the ice two principles are particularly worth considering:

Your body positioning (Centre of Mass) directly affects the load that is transmitted down through your legs and onto the front points.

LOOK at where you are placing your front points.

To illustrate the importance of your body positioning try this little exercise (with or without crampons. If using crampons it works well if you can place the points in the ice on a short steep step just of the ground. If need be use your axes to give you a couple of handholds).

Stand with your feet shoulder width apart and your eyes closed.