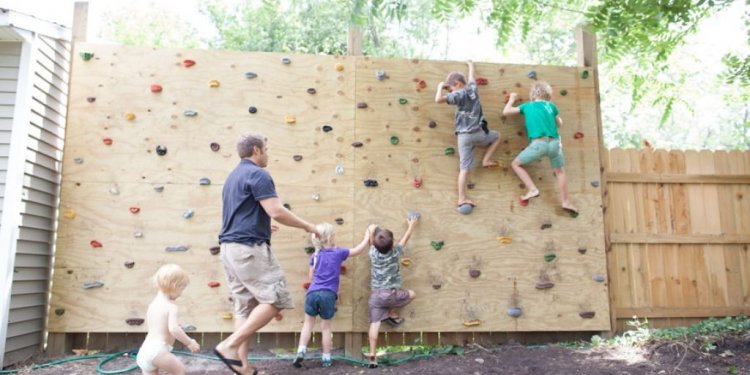 I knew that I only wanted to build this once, so I spent several weeks thinking about the design and planning. First, I scoured the web for ideas. There were not nearly as many examples of backyard climbing walls as I hoped to find. I quickly settled in on a few goals for the wall. GOAL 1: make sure it doesn't get boring quickly. This meant that the wall had to have some variety in the "terrain." GOAL 2: Provide good conditioning. This meant that the wall had to have some overhanging sections. GOAL 3: Let the wall double as a kid's playground. I wanted the kids to be able to climb, but I also wanted to incorporate some non-climbing entertainment value. Since I was going to build a big structure anyway, this seemed reasonable. With these goals in mind, I learned a little bit about Google Sketchup and started to plan.

First, I made several planes in Sketchup and played with different configurations of angles to try to pick a wall layout that would provide training and stay interesting. The picture to the left shows an example of this experimentation. I also gradually started to think about how to incorporate a kids' fort and playground features. Specifically, I wanted a multi-tier fort, monkey bars, and a slide.

I finally ended up with the plan on the left (Front, far left. Back, left). It is drawn to scale: The front face is 12' wide and 12' high. I picked this height after a visit to Lowes that revealed that the largest post they had was a 16' 6"x6". In this initial Sketchup model of the final design, I focused on trying to capture the scale, angle, and position of the climbing panels. The face on the left side will be paneled as well, and there are two tiers of floor on the back for the fort. Some of the railings and minor supports are not shown. Here is the actual Sketchup model, in case you want to play with it in 3D.

After I had the rough plan put together well enough so that I could picture the whole project, I completed a more detailed model to plan how the major supports would work (at left). This more detailed Sketchup model basically helped me to write up a bill of materials and make sure that there would not be nasty surprises once I started cutting boards. I wasn't trying to build a complete model to serve as a blueprint - just to get a model that let me visualize how everything needed to piece together.

I thoroughly enjoyed building this wall. There were a lot of different types of work to do and lots of interesting challenges to work around. It is hard to say how much time it took, because I worked on it mostly in intermittent 1 to 3 hour chunks at night after the kids went to bed using a combination of floodlights from the house and a headlamp. I had help a few times holding up some of the long angled frame pieces, but otherwise I did all of the work myself. If I could have consolidated the work into a contiguous time block, I think I could have finished it all in about 3 days (not counting time for paint to dry).

Setting the posts and major supports

The first thing to consider here is picking a good location. We picked a spot off to the side of the backyard that was out of the way of our normal activities. In fact, the wall took the place of my burn barrel, which is visible in a few of the photos. The spot turned out to be perfect. I dug holes ~ 4 feet deep for the 6" x 6" posts, and 2 to 3 feet deep for the 4" x 4" inch posts. It was tricky to set the 6" x 6"s in the hole by myself. I used a sawhorse as a pivot point, dropped an 8 foot 2 x 4 in the hole, butted the end of th 6 x 6 against the 2 x 4, then stood up the other end so the front end slid down the 2 x 4 and into the hole. I used 2x4s nailed to stakes to align the posts vertically, then tamped clay into the hole. I used some concrete for the big posts, but I don't think it was necessary. After 1 foot of tamped clay, they were very solid.

Once the three posts and 2"x8" braces for the main wall were up, the rest of the framing was fairly straightforward. I started with the left overhang. I used metal hangers to attach 2"x6" crosspieces to the 2"x8" horizontal supports. I cut them to length and used the chop saw to cut a 30deg angle to match the 2"x4" supports on the face. The trickiest part was cutting the notched bottom of the 2"x4" so that it sat on top of the lower 2"x8" cross piece. It was a bit tricky to get the face aligned so that all three supports would be flush with the plywood panel, mostly due to some warping in the large 2"x8" cross supports. Once the angled 2"x4"s were in place, adding additional bracing was pretty straightforward.

These pictures show the framing once it was almost done. The major pieces match for the most part with the original model. You can see some of the panels where I leaned them up for painting. The structure wobbled a decent amount when it was just screwed together initially. Once everything was attached in the right locations, I went back through and strengthened key joints with carriage bolts. The bolts immediately made the frame much more rigid.

Playground on the back of the wall

This picture shows the back of the wall. It has two platforms, including a deck up behind the top of the overhangs (behind the upper railing in the picture). A homemade slide descends from the bottom platform, and homemade monkey bars (you can only see the side rail of them in this picture) run parallel to the wall from the bottom platform. The kids love this "fort."

Build your Own Rock climbing Wall