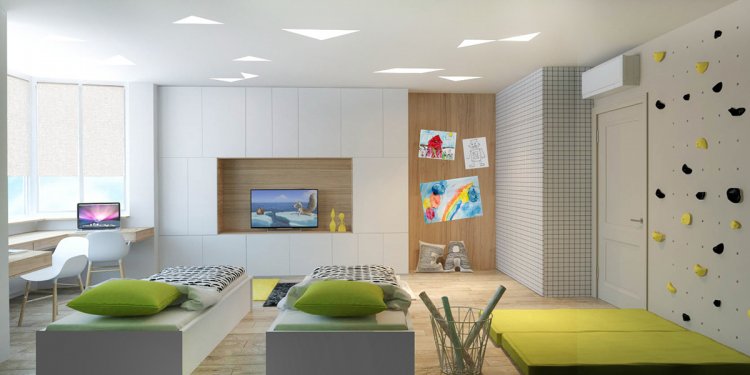 A "practical" minimum age may be an age where you can teach the child "climbing etiquette" that is part of climbing safety. For example:

Another consideration is the readiness (ability, capacity) of the child to LISTEN to your instructions, especially when a child begins to panic or get scared and you need to instruct the child to safely climb down or - in some cases - I've seen a parent encourage the child to push past comfort zone or "fear zone" to complete a top-rope route, or help a child with the "beta" (way to solve the route problem) by pointing out a foothold or handhold that the child may not be able to easily see.

One of the most important consideration with children is to follow their lead and allow them to climb at their pace. Sometimes this can look very different from how adults acclimate to climbing. I'll use a personal example:

When we first took our 6 year old, we started him on top rope with a body harness. One of us belayed him on top rope. We let him get comfortable wearing the equipment and the feeling of being belayed. We self-monitored how much we "pushed" him when he began hesitating at a certain height on the route. At first when he wanted to climb down and he was half-way on the route, we let him down.

Over a few sessions we decided we should get him to just get to the next hand-hold wherever he wanted to quit. This was usually about half-way on the route (and yes, it is a route adults use to acclimate so it is not short, it's a 20-ft wall). What would happen was he ended up crying and saying he was scared. We reminded him that he was harnessed and held by a rope, and told him it's perfectly normal to be scared and that it's all right to be scared... but then we'd ask him to "just grab onto the next boulder, and we'll let you down."

Well, he ended up hating that experience! He then became reluctant to climb until... my husband thought maybe our child could use the autobelay device instead.

Now, I was horrified with that idea. I've done top-rope and autobelay and every single time I feel less secure using the autobelay device versus having a human being holding the other end of the rope. Not only that, if you've never used an autobelay device, basically it requires you to lean back and let go and EVER-SO-BRIEFLY-FREE-FALL before the device engages and smoothly let you down.

Every single time I see a newbie in the rock climbing gym on autobelay, without fail, the very first time they have to come down, they freeze and refuse to "lean back and let go of the wall" like their partner or instructor is telling/yelling at them to do. That was me, the very first time - my climbing buddy yelled, "just lean back and let go!" and I yelled down, "but I don't want to!"

Over the next 15 minutes, we watched our kid climb up a couple of hand holds then release to get used to how the autobelay device works and feels. He'd then climb up a couple more hand holds then come down, a couple more hand holds then come down... by the next climbing session our kid was able to climb to the top of an even higher (a 25-ft wall) top rope wall via autobelay device, BECAUSE HE FELT IN CONTROL. I saw my kid essentially training himself to incrementally climb higher and higher until he could comfortably reach the "top".

Some of the skills he's naturally acquired having to position his body because he's so much smaller/shorter for regular top-rope problems will translate really well when he grows older. Technical skills like pivoting your hips and leaning into the wall and smearing the wall with your feet - the kid's intuitively doing this because that's how he can move up when the gaps are wider spaced apart (i.e. for adults to climb). We joke that some of the crimp holds must seem like huge holds for little hands. Now we're starting him on some bouldering but we've learned our lesson and are following his lead.

Indoor rock climbing can be an incredible way to empower a child. A child develops strength but also "hacks" (technique) to solve a problem. Kids like to climb in general, and indoor rock climbing is a structured and disciplined way to teach them how to move and control their entire body: it's a very brainy versus brawny sport, I can't tell you the # of engineers and physicists I've met at our local climbing gym.