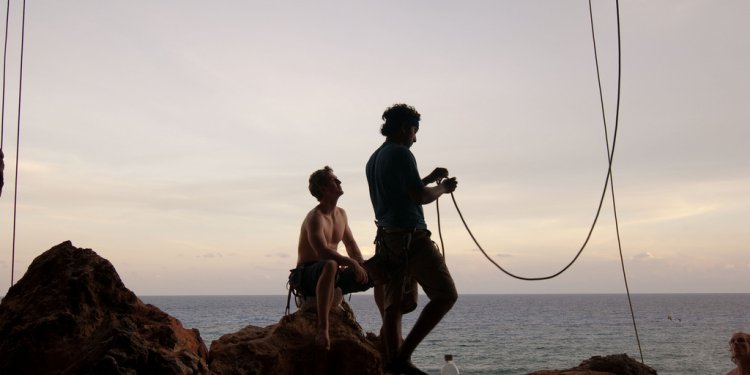 If you spend a bit of time on Google I think you'll scare up some good info fairly easily. I'm pretty sure I've seen some info indicating that you can find a paid guide or even a climbing instructor. You can start with this link:

As far as I know the climbing on the Brac is considered to be for experienced climbers. There must be some easy routes that locals know, but I expect few people who aren't fairly serious climbers try it while they're there. The climbing guide on that website doesn't list any routes easier than 5.6. Some athletic and determined beginners can manage that on their first day, but others will just find it very discouraging if they have trouble. I'll also note that what your local gym calls 5.6 might be considered 5.5 or 5.7 elsewhere. In years past many very good Yosemite climbers came to my area and got into difficulty on climbs that were rated 2 grades easier than what they thought they could do without difficulty. Part of that was just in how things were rated and some was that different rock has different characteristics.

I've seen some pictures that make the rock look fairly user friendly, but an awful lot of the rock around the bluff is very sharp. The first time I was there I gave brief consideration to the idea that if you just tripped in the wrong place you might bleed to death from 1000 tiny cuts. Climbing in the real world is a lot different than climbing in a gym, and I'm sure that the Brac isn't the ideal place for your first taste of climbing on real rock. I don't mean any of this to scare you or say you shouldn't do it, but it's probably a good idea to wait until you're there before you commit to it, at least in terms of making any payment that's not refundable. I'll note that my experience has all been elsewhere, and if you can talk to somebody who has actually climbed there you may get more encouraging news. Of course you can hike out to the bluff and see it up close, and maybe watch some climbers, even if you don't do any climbing yourselves. You can also google for climbing areas near you, and you may find something close enough for a visit.

I've got much better news about caving on the Brac. There are quite a few caves (I've seen counts as high as 125 or so). Most are relatively small, and because of the porous nature of the rock they'll be generally dry, though I'm sure you can find some mud and puddles, especially after a recent rain. You'll find bats in many of the caves; in case you're not familiar with them, they won't bother you if you don't bother them, just like most animals. You may also see some rats, but they're wood rats, rather than the city rats that are a problem in some places. A few caves might be big enough to really spend some time, but most are fairly small. I believe you can find guides for caving, but you can go on your own and be quite safe as long as you exercise good judgement and know the rules. Since most of the caves are fairly small it's difficult to get lost for more than a brief moment. For a small amount of casual exploration I'd plan on being extra cautious and skip the helmet, but if you've got your own climbing helmets and can fit them in your luggage it's the safer option.