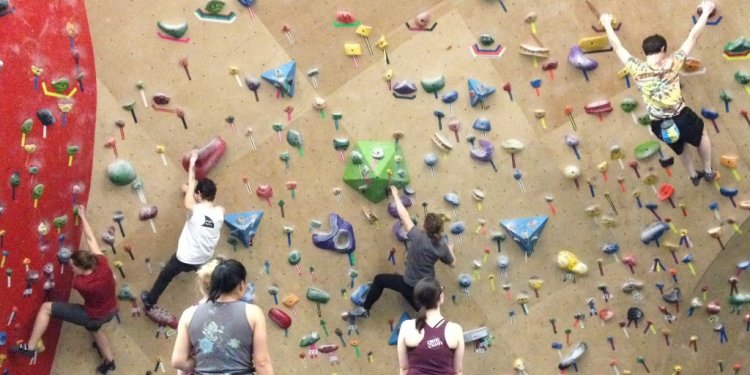 Games on the climbing wall are fun and create interest. They can add to the value of the workout by creating an enjoyable atmosphere and usually extend the length of the workout. Here are a few games that can be played at a climbing wall. If you know of a game not listed please describe it and send it in at the bottom of the page. Add your name and city to get credit for sending in the game. Also try Cyberclimber. Online climbing game.

Two climbers of with similar ability play the game. Begin by agreeing on the first sequence of three to five moves. The first climber gets on the wall and climbs or traverses this sequence of moves. When the first climber finishes, he/she adds one more move. The moves can be marked by chalk, tape or memorized. Each time a climber completes the sequence he/she adds on another move. You can play "hands only" where any foot hold can be used, or specify both handholds and footholds. Continue to repeat this pattern until exhaustion. Great climbing game for building endurance and memorizing sequences.

This is mostly a traversing game since it requires a partner to "point". The person designated as the pointer will use a broom handle or any pole to point out the next hold. The climber begins climbing. The pointer taps the next hold. This should be times so the next hold is tapped just ahead of the person climbing. A good pointer makes it challenging but not beyond the climber's ability. The game ends when the climber falls. The climber and pointer then switch positions. This excellent practice for developing your on-sight ability.

The first person points out a sequence of 4 to 10 moves. There are no markings placed on the wall. The second person has to climb the route remembering each hold. The value of this climbing game is it teaches you to remember the holds in the route, making it an easier transition from preview to climbing.

Create a route of about 20 holds. Mark the holds with chalk marks. Each climber climbs the route. After each successful climb/traverse the finishing climber rubs out a chalk mark. If the next climber cannot climb/traverse it without falling the turn is passed to the next person. If no one can do it the original climber must prove it can be done. If he cannot do the move the mark is put back on.

Several people on a bouldering wall play tag. The first person is "it" and tries to climb to another person and touch them. The person being "tagged" then must tag someone else excluding the person just touched. The previous person earns a rest and can climb down until the next person is tagged. Greatly improves endurance/stamina. This is a good climbing game for youth teams.

Place one or two foot holds and one or two hand holds. Place a large hold higher above the handholds. Each person takes turns "dynoing" to the hold. The dyno can be vertical, off vertical or even horizontal. Improves dynamic climbing.

One Arm / One Foot

Two or more climbers decide on a sequence and attempt to send it using one arm. This can be done as an add-on or take-away climbing game. This game improves dead-point ability and greatly strengthens your arms/legs. The version of this climbing game using one foot will greatly improve body tension and trunk strength.

Designate 8-10 'goals' (eg, holes in the wall, big holds) and place the same number of draws in a location near them (say hanging on another hole. Person must then climb back and forth from the pile of draws, taking one draw at a time to the goals (one for each goal). This also makes players think about strategy, whether to go for the far away goals first or last. Improves Endurance, Strength. Sent In By: Seamus Allan from Christchurch, New Zealand

One person is 'in'. They select a place with quite a few good holds. The other partner has to try to climb around then in circles while the person 'in' has to try to stop them by getting to the holds before they do. When the person goes for more than 10 seconds without changing a hand or foot they swap places. Sent In By: Dena, Nelson, NZ

Two "participants" battle each no holds barred on a bouldering wall. Last person on wins! Note: only do it on small quiet walls. Improves endurance and balance. Sent In By: Matt

Blind fold a climber. Start to climb by feeling with hands and feet all around the wall. See who can get the furthest without falling. Improves awareness and sense of touch for feet and hands. Sent In By: Andrew, from Searcy

Hang different items on the wall (hats, gloves, pants, shorts, jackets, shoes, etc.) or even on the ground. The idea is that the climber must pass through the wall and whenever he or she finds something, they must put it on! Try the same thing but now undressing. It is a great climbing game to work resting positions and endurance. Sent In By: Rulas from: Queretaro

Lay out a section of the wall just like a play field for the game "Twister" (™). It has the same rules as normal twister. Improves endurance and balance. Training Value: uhm? Sent In By: Marco bij de Vaate, Rotterdam

One person ties in and climbs maybe 1/4 the way up the wall (a wall with larger holds) they then pick a hold at least 7 feet away in any direction (not usually up though) and calls it out. The belayer then locks off the rope when the climber yells "I'm Spiderman!". The belayer will call out that the rope is locked off. When this is done the climber jumps off the wall and swings for the hold. If they make it, they get to try again. if they don't, the two people trade places. I suggest getting permission before playing this game, as it takes up a lot of space and often gets a response from onlookers of "what the %&$! are they doing?" Training Value: Improves ability to judge distance. Sent In By: John, New York

Works with two or more people and is basically the same as the basketball version. The first person chooses a point to begin and a point to end. They then roll a dice to see how many holds they can use the starting and ending holds. If the first person completes their route then the rest of the players must complete it, getting letters for failure. If the first person doesn't complete the problem, then it goes to the second person and so on. Training Value: strength, balance. Sent In By: Matt, From City: Texas

This climbing game includes as many players as wanted. The first climber traverses across the walls and makes the most laps as he can. Then the second climber breaks the record of laps the forst climber did. If he does, he wins, and if does not, he loses. Training Value: endurance/stamina. Sent In By: Jireh Climaco, From City: Cebu City

Pick four routes you know you can do on the bouldering wall. Do each one four times, make a loop and see how many times you can do each one. Training Value: Bouldering, Sent In By: David From City: Stamford