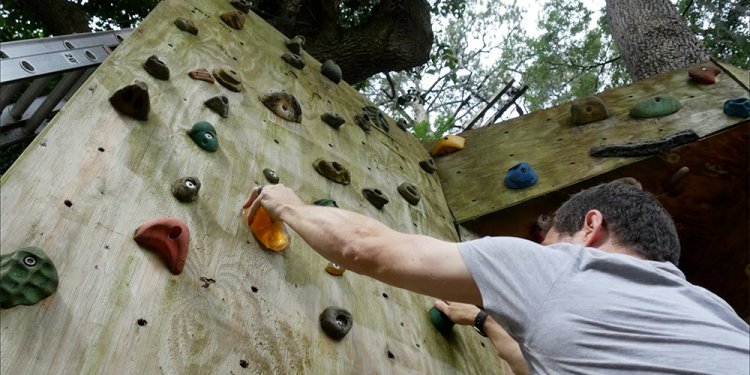 A ladder has rungs, a stairway has a railing, and rocks have handholds. Ascension is often aided by something for the hands to grasp for balance, and handholds serve this purpose in climbing. Handholds come in a variety of sizes, shapes, and textures, so there are many different ways to hold on. This relationship between holds and grips sets the tone for the sequence of moves on a climb. Though both body positioning and footwork are more critical for successful climbing, learning how to grip the different types of holds you encounter is an important skill to master.

When describing a hold, one significant attribute is the positivity. Positivity refers to the relative ease of maintaining contact with a hold. There is an inverse relationship between the positivity of a hold and the force required for adherence to it (the more positive the hold, the less the amount of energy necessary to hold on). If a hold has a deep incut, a well defined edge, high relief texture, or is simply easy to grab, it is considered very positive.

1. Edges - An edge is a flat face that meets the wall at around a 90º angle. This type of hold can have a positive outside rim, or lip, and it can also be slightly rounded.

2. Pinches - Pinches are holds that have two opposing faces that are pinched to grip. Though they are usually gripped by the entire hand, technically any hold in which the use of the thumb in opposition improves the hold's positivity is a pinch. Pinches are usually two edges that protrude from the rock surface like a book, although pinches can also be small knobs or even sloped rails.

3. Pockets - Pockets, much like their name implies, are holds that have an opening, shallow or deep, that only allows the climber to hold them with one to four fingers. Finger strength must be trained in order to use pockets effectively. Pockets that are only large enough for one finger are called monos. Whenever you use one- and two-finger pockets, always use your strongest fingers—the middle finger for monos and the middle and ring fingers for two finger pockets. Due to the increased surface area available for contact friction, it is best to use as many fingers as possible. Though monos are the most dangerous, all pockets load only a couple of fingers, so climbers must be careful to avoid injuring their tendons.

4. Slopers - Slopers are exactly that—sloping handholds. They are handholds that are rounded and lack a definite edge or lip to grip. Slopers are the most positive when your weight is distributed directly below the hold with your arms straight. The increased contact friction gained from training on slopers applies to all other types of holds. Though they are not the easiest holds to grip, they cause the least amount of stress to your tendons.

5. Flakes - A flake is a thin slab of rock detached from the main face.

6. Jugs - The term jugs has two meanings for climbers. One meaning concerns size: jugs are traditionally large, incut holds with space for both hands to fit on the hold. The word jug can also refer to a hold's excellent positivity. A jug hold should be easily and comfortably gripped, and therefore is excellent for active resting or clipping holds when lead climbing.
To climb efficiently and avoid injury, it is important to learn how to hold onto the various handholds. There are multiple ways to grasp every hold, but some are more effective and/or more efficient than others. Quick discernment of the different grips and their relative strengths while climbing is an important skillset to develop.

The CRIMP is the grip used on crimpers. When you are crimping, your second knuckle arches above your fingertips creating a downward force on the hold. One way to increase the strength of your crimp is to wrap the thumb over the index finger, making it a RING GRIP. Adding the thumb increases the number of muscles in your hand that are actively working to maintain contact. The crimp is a powerful and solid hand position used for thin edges. However, exercise care when using the crimp because it causes the most stress of any grip on your tendons and finger joints.
For the PINCH GRIP, the thumb "pinches" in opposition to the fingers, much like picking up a book by the spine, though the opposing faces are not always edges with positive lips. The pinch grip can be used on slopey knobs or two pockets that are side-by-side.

The OPEN GRIP utilizes the contact strength of your hand to maintain positive friction on a hold. This grip is used on slopers, but is not confined in its application to any specific type of hold. Effective friction is achieved by placing the maximum surface area possible of your hand in contact with the hold. Because your hand is curving naturally, with decreased joint angles, and the hand position may allow the rock to provide some tendon support, open grips place the least amount of stress on your tendons and joints. Using the open grip to smear with your hand on the wall is called the FRICTION GRIP.

A WRIST WRAP or MONKEY HOOK is used to hold on to large slopers or jugs. Simply hook the heel of your hand over the...