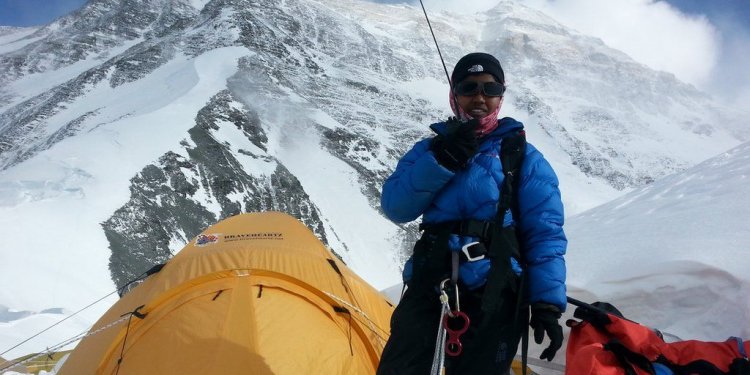 Mrs Drake was not altogether surprised that her son had reached the 29, 035 summit: Everest was the latest success in Jordan's quest to conquer the Seven Summits, the highest mountains of each of the seven continents. He said he was inspired by a painting of the summits in his school's hallway.

The mountainering prodigy climbed Africa's Mount Kilimanjaro when he was 10, and has only to scale the Vinson Massif in Antarctica to complete the Seven Summits. In his blog he had described scaling Everest as "the biggest goal of my life".

The Everest climb - his first above 26, 240 feet - was controversial, sparking a debate about child climbers and parental responsibility. Nepal insists that Everest climbers have to be 16, but Team Jordan went to base camp on the Chinese side where there are no age restrictions.

Jordan said it might take him "many attempts" and "a couple of years" to climb Everest but had declared himself "very prepared emotionally, and definitely physically", although he said he would turn back if it became dangerous.

His team was made up of three Nepalese sherpas, his father, Paul, who is a mountaineer and paramedic, and his stepmother, Karen Lundgren, an experienced mountaineer.

On May 13th the team was preparing to leave base camp. "Jordan has displayed all the patience and maturity in the world. Body and mind is ready, " Ed Alta, a team member wrote on Jordan's blog. "We are on a 48-hour countdown. This means leaving Base Camp for the big trek to the foothill, then it's on. All in all, it's a 5-7 day climb. Team is very ready, weather is about to be in our favour."

Jordan wrote: "Today I leave base camp...and every step I take is finally toward the biggest goal of my life, to stand on top of the world... I feel in some way I have succeeded in just getting this far, but on the other hand I am drawn to do something great. Know that it comes from my heart. I hope to make you all proud."

By May 19 the team had reached Camp1/North Col where temperatures fell to -24C. "All is well, " the team blogged. "We are waiting out the high winds before our next move."

On Friday the team called on their satellite phone to say that they had stopped for tea, everything was going well and they were ahead of schedule.

The clouds were clearing and they could see the ridgeline all the way to the summit. "It looked absolutely amazing." they said "The team is using oxygen for this part of the climb. Everyone is strong; especially Jordan."

They made it to "Step 1" (27, 890ft) and considered an attempt on the summit. "After years of preparation, determination and hard work, Jordan is finally approaching the summit and about to realise his ultimate dream, " the team wrote.

Yesterday a spokesman for the team, in the United States, announced: "The team just called in and confirmed that they are standing on top of Mount Everest - the highest peak in the world. Their dreams have now come true. Everyone sounded unbelievably happy."

The team had reached the summit hours earlier than expected and Jordan had broken the record held by 16-year-old Temba Tsheri of Nepal to become the the youngest person to scale Everest.

Rob Bailey, the team's spokesman, in the United States, said: "The team hugged each other and said, 'I love you, I can't believe we're finally here' and started crying." Jordan has now climbed Kilimanjaro in Tanzania, Africa in 2006; Elbrus in Russia, Europe, and Aconcagua, Argentina, South America in 2007; Denali in Alaska, North America, 2008; Carstenz Pyramid, Indonesia, Oceania, 2009; and Everest, Asia: 2010.

The teenager and his team expect to return to advance base camp in a couple of days. When the Everest celebrations are over the young climber will turn his sights to Antarctica and his seventh summit which he will tackle in December. "A piece of cake, " his mother said.