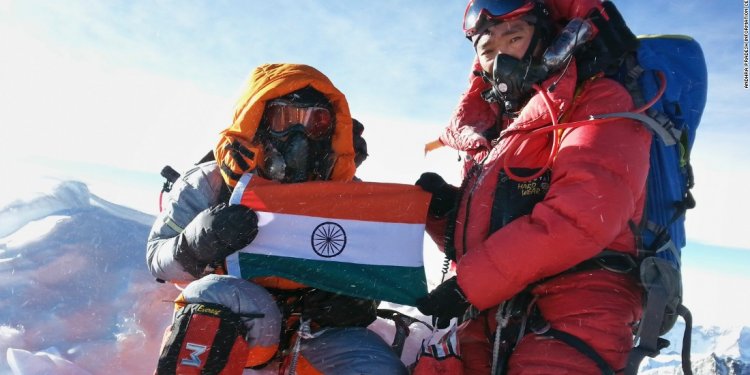 A 43-year-old Indian mountaineer has died while descending from the summit of Mount Everest, in the third fatality on the world’s tallest mountain in as many days since climbing resumed after last year’s avalanche tragedy at Base Camp.

Subash Paul, who climbed the 8, 850-meter (29, 035-foot) mountain on Saturday, perished the next day due to exhaustion, Wangchu Sherpa of the Trekking Camp Nepal company said Monday.

An Australian woman and a Dutch national have also died since Friday due to altitude sickness in the notorious “death zone, ” where the air is so thin that only the fittest can survive without supplementary oxygen.

Hiking officials and climbing veterans say the deaths raise questions about the preparations and safety standards of some climbing operators, with cut-price local companies competing for business as international outfits scale back operations.

This year’s Everest campaign has been hit by high winds on some days when climbers had been counting on the weather “window” to open to make their summit bids before the monsoon sweeps in next month.

Queues have formed on the final stretch to the summit, which is often secured by a single rope line, leading veterans to complain that slow and inexperienced climbers were holding up others and putting them at undue risk.

Hiking officials blame the government, which charges $11, 000 for each Everest permit, for failing to spend any money on safety measures. The government collected $3.1 million from 289 climbers as permit fees so far this year.

“The deaths were not due to accident or the crowd, ” Tourism Department official Sudarshan Dhakal said. “Energy loss and altitude sickness mean that they were not well prepared.”

Expedition organizers were assembling a rescue team on Monday to retrieve the bodies of Australian university lecturer Maria Strydom and Dutch climber Eric Ary Arnold. Strydom died before reaching the summit on Saturday, one day after Arnold perished after attaining the peak.

Apart from the three deaths, two other Indian climbers have been missing on Everest since Saturday, and hiking officials said chances of finding them alive were slim.

Another Indian woman who fell sick was being escorted to lower camps and will be evacuated by a helicopter, an agency official said.

While fatalities are not unusual, there are fears that the latest casualties could again hit mountaineering in Nepal.

At least 18 people died a year ago when an earthquake sent a massive snow slide careening into Base Camp, while an avalanche in the treacherous Khumbu Icefall killed 16 guides in 2014. The back-to-back tragedies had halted climbing on Everest.

“It is a difficult and challenging climb and many people have died, ” Australian Foreign Minister Julie Bishop told reporters in Brisbane, adding that the government was assisting with the repatriation of Strydom’s body.

Arnold Coster, the owner of Arnold Coster Expeditions, which led the group that included both Strydom and Eric Ary Arnold, said both climbers became ill very quickly on the descent.

The Dutch climber was assisted down to the South Col camp, the final camp before the summit, where he was given oxygen and medicine but “unexpectedly passed away that evening in his tent, ” Coster said in a Facebook post.