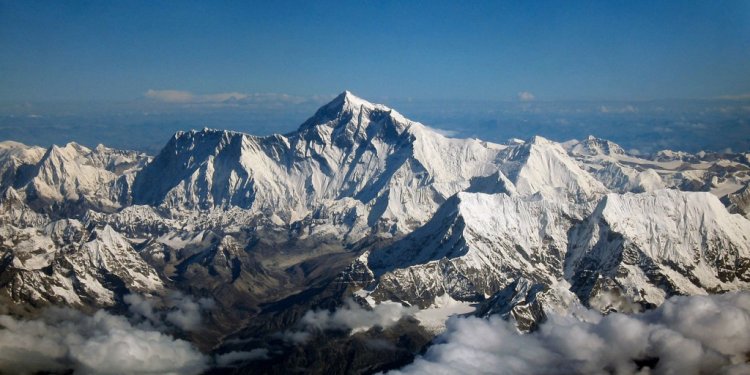 6. The Indian mathematician Radhanath Sikdar was the first to put a figure on the height of the mountain. He calculated that it reached 29, 002 feet (now adjusted to 29, 035 feet), the highest point ever recorded on earth.

8. Eighty years later, Douglas’s grandson Charles Douglas-Hamilton flew to the peak as a passenger in a Jetstream 41 Turboprop.

10. The first two men to snowboard down Everest were the Frenchman Marco Siffredi and Austrian Stefan Gatt in May 2001. In September 2002 Mr Siffredi attempted to descend the mountain a second time, choosing the steepest and most hazardous route. However, this proved to be a challenge too far, and he disappeared midway through the descent.

11. In May 2005 Didier Delsalle claimed to be the first helicopter pilot to land on the summit of Everest. Delsalle’s unmodified helicopter hovered while making contact with the summit for around two minutes.

12. The worst year on Everest, in terms of deaths, was 1996 when 15 climbers died in the season, including nine in a single incident (documented in Jon Krakauer's book, 'Into Thin Air'). A close second was as recently as 2012, when 11 climbers lost their lives. Hundreds of corpses are thought to be still on the mountain.

13.The most dangerous area of the mountain is often considered to be the Khumbu Ice Fall, which is particularly dangerous due to the unpredictable movement of the icefall.

14. The oldest person to climb Everest is 80 year-old Yuichiro Miura of Japan, which he did earlier this month.

15. Yiuchio Miura also successfully skied down nearly 4, 200 vertical feet of the mountain (although not the whole way) from the South Col. A documentary, The Man Who Skied Down Everest, was the first sports film to win an Academy Award for best documentary in 1975.

16. The mountain has many names. In Nepal the mountain is known as Sagarmatha, meaning “forehead of the sky” and in Tibet the mountain “Chomolangma” or ‘mother of the universe.’

17. The youngest person to reach the summit is 13 year old Jordan Romero. In May 2010, the young American broke the record previously held by 15 year old Ming Kipa of Nepal.

18. In 2010, Dubai broke the record for both the world’s tallest building and tallest man-made structure of any kind with the Burj Khalifa at 829m high. Everest is more than ten times its height.

20. It normally takes around 12 hours to climb the final mile from the highest Base Camp to the summit.

21. Lhakpa Tenzing Sherpa currently holds the record for the highest number of successful ascents, having climbed Everest 21 times since 1990.

22. The British record is held by Kenton Cool who has now climbed to the summit of Everest 11 times.

24. Last May, a local Nepalese woman, Churim Sherpa was the first to complete back-to-back climbs to the summit in the same climbing season. She made the first ascent with a group of four other mountaineers on May 12 2012. Then, five days later and with just two days’ rest, she went up Everest for a second time, climbing solo and tackling the mountain’s steepest face.

25. The first tweet from the summit was sent by Kenton Cool in 2011. On one of his many trips to the top, he tweeted: "Everest summit no 9! 1st tweet from the top of the world thanks to a weak 3G signal”

26. Leanna Shuttleworth became the youngest British woman to scale the heights of Everest when she climbed to the summit aged 19 in 2012.

27. Every year the mountain grows taller by 4mm as a result of the upward thrust generated by two opposing tectonic plates.

28. The rock at the summit of Everest is marine limestone and would have been deposited on the seafloor around 450 million years ago.

29. Even after Sir Edmund Hillary and Tenzing Norgay had reached the summit, Everest’s West Ridge widely thought to be unclimbable. However, in 1963 two Americans, Willie Unsoeld and Tom Hornbein, proved otherwise when they reached the summit using this route. It still has a fearsome record. More people have died trying to reach the summit this way than have succeeded. Charles Wylie, a member of the 1953 British expedition called it " the most remarkable feat I have heard of in high-altitude mountaineering."