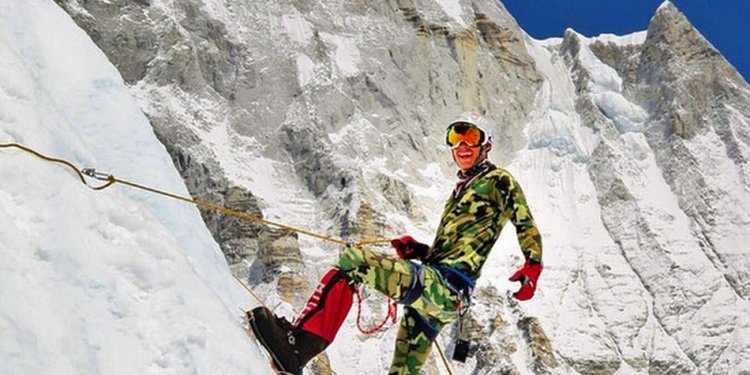 At about 6am, we were gone. A little later than we had anticipated, but I had run out of hand warmers and was trying to get my hands warm before we left. It was an ice cold morning. We got down to Camp 1 pretty quickly (less than an hour), but then we hit those 7 walls that lead down to the actual Camp 1 tents. These proved to be challenging for me, again because they each just took all my energy and breath away (literally). At the bottom of each I had to gather myself to find my breath...which then followed by me having to go slightly uphill, which at the time, felt like the end of the world. One by one, I made it up and down...slowly but surely. Eventually we found ourself at the top of the Ice Fall where the big rappel down was (pictured to the left). That wasn't so hard, and I actually had fun doing it. And then the wandering through the Ice Fall began. My last time through it. I was moving slow, but I knew that every step I took was just one closer to safety (and possibly a Coca Cola). I mentally lost myself, just focusing on something entirely different, putting my body on automatic. I wasn't my normal climbing self, but I was moving, and doing all the things I needed to do to get down through that freaking Ice Fall. Before I knew it, two more hours had passed and I was starting to recognize the last few bottom features of the Ice Fall...I knew there was one last rappel and then I'd be in the "safe" zone. Phil had asked Lapsom to meet us at this point with some juice, so there he was. I can't remember what juice it was, but it was canned, and it was maybe red grape? I drank it in two gulps and it was the most satisfyingly sugary thing I could have wanted at that moment. He then offered to carry my bag. I think I loved him then.

The rest of the walk down was a dream, just weaving in and out of ice blocks at the very base of the Ice Fall. We had planned to walk directly to the Everest ER to have my lungs checked out, but we first made a stop at the Mountain Trip camp (Phil knew some Sherpas there) where they offered me a Coke (HELL. YES. BELLS OF GLORY.). I could barely drink the Coke I was so thirsty, I kept coughing it up like a dog who drinks his water too fast. But it was delicious. Absolute gold.

The doctors checked me out. I was fine. My lungs sounded perfect, no fluids in there. So whatever I had had up at the South Col, after descending 3000 meters rapidly and taking drugs, was gone. My lungs were clear. Not the news I actually wanted to hear though. It would have been nice to know that I came down because my lungs were a mess and that I had saved my life. Instead, I just have to assume I would have gotten worse had I continued, but that I caught symptoms of HAPE early enough by coming down quick such that nothing bad happened to my lungs. Or maybe I made a mountain of a mole hill and I was actually fine? I'll never know. The only thing I know is that I was coughing up blood. And that can't ever be good. And that I was oddly exhausted and breathing funny. Okay, yeah, I guess that still sounds pretty bad...

Phil and I go back to camp and I feel relieved to be safe and relatively back in comfort. Da Pasang makes a delicious meal for us and now it's just a waiting game. Wait for my team to summit (finger's crossed) and then wait for them to come down so we can all chopper out together as a team. The day transpires as normal, with some radio chatter that our whole team successfully summited and is doing well on their way back to Camp 4. SUCCESS! I go to bed early, being tired and all, and I just lay in my tent trying to process the last 24 hours.

And then Phil wakes me up...

He asks me to run to the neighbors to ask if they have radio connection with Camp 4. Something's wrong. He thinks Robert, one of our climbers, is stuck at Camp 4 in a really bad way and he's trying to communicate with him to figure it out. The neighbors don't have any radio comms with C4 at the moment so I run back down to Phil, who's in the kitchen tent by the radio, speaking with Lysle (another team member) who is at Camp 2 (he had descended all the way from the summit that afternoon) relaying messages from the rest of the team at Camp 4. For whatever reasons, the radios weren't working very well. This can happen, as Base Camp is tucked away out of sight from the summit. Camp 2 gets a better signal, hence why the communication has to be relayed. NOT the best way to communicate. Well, it technically is the best way to communicate - the only way, really - but it's not always the most reliable.

Anyways, everything quickly is revealed to me: Robert summited (along with the rest of the team), but he took the longest and was in "critical" condition back at the South Col. Apparently he had collapsed on his descent, and had been minutes from death before he was administered Dexamethasone (not sure on the details here, but I think by an IMG guide who was nearby). "Dex" is essentially a "come back from the dead" drug. Something you take to help you come back to life so you can get down off the mountain in an extreme crisis. This was an extreme crisis. The only issue was that it was now night time. No one was going anywhere until morning. From our broken communication, we learn that Robert is in "critical" condition, being taken care of by Ben, Laura, and Barbara, all huddled together in the same tent.

I'm not going to go into the details of what he was going through, considering I wasn't there. Since Robert, THANKFULLY, is still alive, you can read his own account of it all HERE.