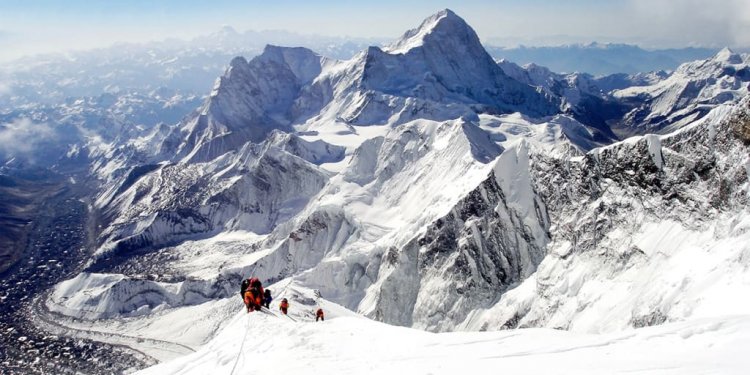 In May 2014, Kuntal Joisher, a software engineer from a suburb in central Mumbai was all set to scale the Everest. Unfortunately, the 34-yearold had to return from Everest Base Camp (EBC) because his expedition was called off after 16 Nepali sherpas died in an avalanche at 19, 000 feet in April 2014 soon after the season had just begun.

Joisher, who had been diligently training for the expedition for six years, was disappointed. But instead of making the long trip back to Mumbai, he chose to climb Mt Manaslu in the Nepalese Himalayas, the eighth highest mountain in the world; on October 1, 2014, he became the second Indian civilian to summit the peak, after Arjun Vajpayi (the youngest to climb Mt Manaslu in October 2011, when he was 18).

Come May, Joisher will again attempt to scale the Everest; this time around it won't be with his earlier Canadian Everest expedition team led by famous Everester Tim Rippel of Peak Freaks but with a Nepal-based agency with whom he climbed Mt Manaslu.

Climbing the Everest is the dream of most climbers, until they realise the price that has to be paid — monetarily, physically and mentally. Not all can afford to climb the Everest.

Last year, when Joisher was to climb the Everest, he was sponsored by an American company CallFire Inc, a cloud telephony services provider. He was also climbing for a cause — to spread awareness about dementia, a medical condition his father has been suffering from for 12 years. But with the expedition called off, he lost the money and had to raise fresh funds for this season's climb through crowdsourcing. By the time you read this, Joisher would have left for Nepal and his trek to EBC would have started on Friday from Lukla.

"Getting sponsors is not easy due to the risks involved, " says Joisher. Seldom do corporate entities come forward. Climbers have been known to take hefty loans or even mortgage their homes, whilst a few are plain lucky to get their family and friends to sponsor them.

Alan Arnette, a motivational speaker who started climbing at 38 (he is now 57) and completed his Seven Summits climb for Alzheimer's, writes a blog — alanarnette.com — which is popular among climbers. "Getting the money is harder than climbing the Everest. The best way is to set aside money every month for as long as it takes. This is how I funded 26 of my big climbs, " he says.

The cost of climbing the Everest starts from the time you start training 12 to 18 months before the actual climb. One cannot climb this peak without being physically and mentally fit. Endurance levels have to be at their peak.

In the past five years Joisher has spent around Rs 35 lakh on training. "The money was spent on organising trekking and climbing expeditions, equipment and training. I spent the majority of my earnings from the past 13 years on my dream to climb the Everest."

Your next investment is in personal gear. While one can rent the gear, having your own personal gear that fits you well is the best. Once the gear is in place, the next is the cost of the climb itself. Those looking to scale the mountain pay between $25, 000 and $75, 000 to even $100, 000 per person, depending on factors such as desired comforts, the amount of bottled oxygen, sherpas, amongst others.

Joisher spent $48, 500 for the climb with Peak Freaks. "The typical cost when climbing the Everest with a Western agency is $45, 000 and above. With a local Nepali operator it can be between $25, 000 and $40, 000." The cost includes the royalty fee of $11, 000 for the peak. Most agencies conduct sherpa-supported climbs. It's nearly impossible to climb the Everest without them. In her book Incredible Ascents to Everest, Sumati Nagrath touches upon the role of the sherpas. Their remarkable physiology enables them to be more resilient to altitude sickness than others on extreme heights.

Over the past 60 years, little has changed: it is undoubtedly the sherpas on whose backs the world's tallest mountain is still conquered.

The Nepal government earns around $3.25 million as royalty fees from climbers every season. It charges $11, 000 per person for climbing the 8, 000-meter peak. Nepal's economy is largely built on Everest expeditions. However, very little actually goes to the sherpas.

Within the sherpa community too there is a difference in earnings. There are climbing sherpas and there are those who only carry the load. Sherpas earn depending on their experience, foreign-language skills, how much load they carry and how generously they're tipped. And, for these arduous tasks sherpas earn between $3, 500 (Rs 2.2 lakh) and $5000 (Rs 3.1 lakh) per climb in the season which commences in March and ends around the first week of June.

The most experienced and renowned sherpa could earn up to $8, 000 (Rs 5 lakh) per climb. This money lasts them until the next season begins. However, the earnings hardly compensate for the risks they take. Compared to the Western guides, their earnings are far less. A western guide can earn as much as $20, 000 (Rs 12 lakh) per climb.

After the tragedy that occurred last year in April, things have changed slightly for the sherpa community. The Nepal government and the Nepal Mountaineering Association (NMA) are now taking a closer look at their compensation levels and are in the process of creating a basket fund.