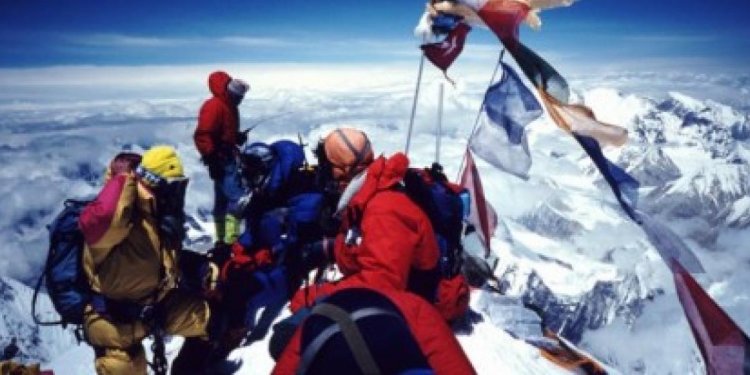 Just under 1000 people attempt to climb Everest each year and about 500 climbers reach the summit every year, this being a combination of Sherpas, other guides, clients, and professional climbers.

- previously the number I was told were about double this, but this is a somewhat detailed accounting and here is some explaination -

For decades, western operators like Adventure Consultants, Alpine Ascents (AAI), Jagged Globe, Himalayan Experience (Himex), International Mountain Guides (IMG) and others have guided hundreds to the top of Everest for prices ranging from $40, 000 to $65, 000, all inclusive.

But that is changing. In 2016 there is intense competition from Nepali owned and operated companies. With many Sherpas having ten or more summits of Everest, they are advertising themselves as Everest Guides and eliminating the traditional Western Guide who would be paid between $10, 000 and $25, 000 and this cost is passed on to the clients.

If you want every perk and luxury you can image on a Himalayan peak in 2016, Alpenglow unapologetically offers a climb from the Tibet side for an astonishing $85, 000 per climber, twice to three times the average price on the north side.

If you want to go with one of the low cost Nepali companies, it will run about $30, 000 from either side. For your own personal Western Guide, International Mountain Guides will set you up for $114, 000.

2014 saw the ice fall/avalanche kill 16 Nepalese Sherpa on April 18, 2014 near base camp. The government pledged a relief sum of around $400 to the families of the guides who died in the avalanche. The Sherpa guides were angered by the relief sum, calling it an insult. The inadequate treatment and compensation for the families resulted escalated such that on 22 April, the Sherpas announced they would not work on Everest for the remainder of 2014 as a mark of respect for the victims, that was the effective end of climbing that year. They were fixing ropes for climbers at an elevation of 19, 000 feet when the avalanche hit. The accident zone, locally known as "the Golden Gate" or "Popcorn Field", lies within the Khumbu Icefall, it is between Base camp and Camp I.

2015 saw the Base Camp Avalanche triggered by a magnitude 7.8 earthquake in Nepal on April 25 kill 22 climbers of all nationalities.

If you do not include these two disasters, then the modern death rate is closer to an acceptable risk rewards trade off.

If you include these two disasters, and I think we should at least include the 2014 deaths since it was part of forward progress of the expeditions and has been and will continue to be on ground that has to be crossed every year, then the modern death rates are less than favorable and might suggest that this is a fools folly.