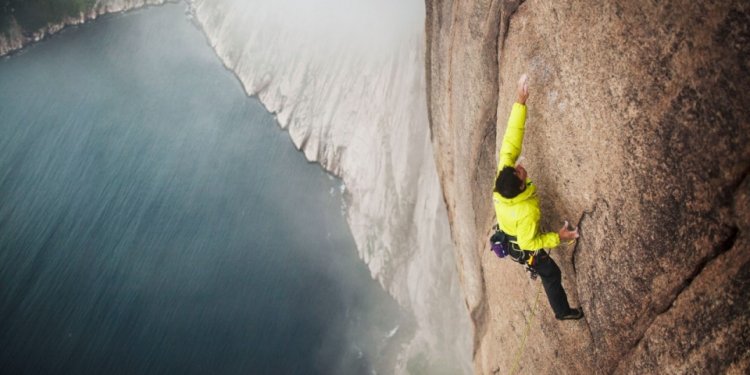 The heady thrills of scaling mountains alone or without safety gear more than outweigh the often lethal hazards for many climbers, writes Scott Johnson.

The Matterhorn Peak is an arrow-shaped hank of rock 12, 279 feet high in California’s Sierra Nevada Mountains. Early in the morning on Sunday July 8, I was half way up the East Couloir of the Matterhorn when I came across a used flare lying haphazardly among some rocks. A little farther up, I stumbled on a pair of battered Oakley sunglasses. Because I had lost my own pair the day before, I put the glasses on and my climbing partner and I continued on to the summit. It was a glorious day with an unencumbered view for dozens of miles in each direction.

When I returned to earth the next day, I heard some disturbing news. Four days before our climb, Michael Ybarra, a freelance writer and “extreme sports correspondent” for The Wall Street Journal, had died alone somewhere on the same mountain. His body was found mid-week just below the Sawtooth Ridge, of which the Matterhorn forms the tallest and most imposing peak, in an area “hard to reach by foot, ” rangers said. I suddenly wondered whether the flare I’d found had been part of the rescue effort.

Even as the news about Ybarra’s death was sinking in, disaster struck half a world away. On Thursday, a massive avalanche swept nine European climbers to their deaths on the slopes of Mount Maudit–the Cursed Peak–in the Mont Blanc region of the French Alps, just above the resort town of Chamonix.

Roughly 30 people die each year in the Alps in climbing related accidents. And hundreds more die around the world. As so-called “extreme sports” like base-jumping and rock climbing become increasingly popular, the apparent dangers they pose have shifted attention away from the reasons many people head to the mountains in the first place.

As usually happens whenever a climber dies, these events brought to mind the contours of this activity that has been a part of my life for more than 20 years. In that time, a few friends and acquaintances have died. Many more have been injured, maimed, or scarred. And yet the allure of the mountains remains strong. Why is this, when it clearly poses such grave dangers?

For many, it’s a possibility of physical, psychological, and spiritual transformation that drives them. Michael Ybarra was alone when he died. He had been climbing solo without ropes or the usual safety accoutrements that protect one, which for many people unfamiliar with the mountains seems like the height of foolishness. What is it, then, that keeps people coming back? And year after year, even in the face of danger?

“It’s a way of removing all clutter from your mind and liberating yourself, ” said Jeremy Samson, one of South Africa’s most experienced and daring climbers and a frequent soloist. “It is a return to the primal senses: addressing fear and coping with anxiety. A beautiful climb is an amazing thing, like a flawless vertical dance.”

The relationship between climbing and meditation or heightened relaxation is well documented, and dozens of alpinist writers have explored how the two worlds intertwine. But for the uninitiated, think of the total concentration required to cling to tiny bits of rock, small cracks, and fissures as you move vertically up a wall several hundred or several thousand feet high. A single misstep or wrong move, and you’re dead. Plenty of anxiety-inducing videos showcasing this can be found on YouTube.

Consider what my friend and long-time climbing partner Adnan Awad said about his own solo climbing, which includes multiple solo ascents of a climb called Jacob’s Ladder, in Cape Town, a vertical wall several hundred feet high on one side of Table Mountain. “Soloing is about being in total control of your mind, body and movement, and enjoying it in its isolation, ” he said, “The climbing is completely uninterrupted by mechanisms of insecurity, which is ultimately what ropes and safety procedures amount to.”

Ybarra had also pondered the allure of this kind of wildness. “Part of the attraction (and no little of the terror) of climbing is problem solving, figuring out what to do in a situation where there are no great options and no little peril in making a wrong move, ” wrote Ybarra in The Wall Street Journal. For Samson, whose grace on the walls I have watched with fascination many times, the progression from climbing with ropes, gear, and safety devices to the free-form beauty of solo climbing is a natural “evolution.” In those higher spheres, the activity takes on a logic of its own, he says. “There is a disconnect between the fatal implications of a mistake and what you are doing, ” he told me in an email recently, “When you’re climbing it’s all about the climbing-not the consequences. Like asking a racing driver what he’ll do if his brakes fail. It’s not a question you address all the time.”

Tristan Firman, another experienced South African climber, says the media and popular accounts place too much emphasis on the risk. “Climbing, and soloing, is a passage, a journey, ” he told me, “It’s not a short undertaking, and mass media fall short when they popularize the sport because they focus on the only really tangible

aspect, the purported risk.” The more important dynamic at work, Firman said, is the longer-term process of elemental self-discovery that can happen. “Part of the challenge is grappling with the mind versus body versus mountain interaction, ” he said, “And because it has consequences, the experience is crystal.”

I am nowhere near as experienced as these men. But I have climbed mountains solo a few times. Once was in the Teton Mountains of Wyoming, when I was in my early twenties. I remember reaching the summit of Grand Teton on my own with an intense sense of exhilaration and accomplishment. The feeling I had the night before was akin to what Ybarra described on February 2, when he was contemplating

climbing The Nose, a very difficult multi-pitch technical rock climb on Yosemite’s El Capitan: “The night sky is ablaze with stars—except for the black void that looms overhead, cleaving the heavens in two … the sum of all my hopes and fears on this evening.”

You are now subscribed to the Daily Digest and Cheat Sheet. We will not share your email with anyone for any reason

Of course, the fears the mountains evoke aren’t limited to the people climbing them. I remember the day in May 1996 when I heard the news that Scott Fischer had died while climbing Mount Everest, an account chronicled brilliantly in Jon Krakauer’s book Into Thin Air. At the time, I was working in a mountaineering shop from which Fischer’s guiding company, Mountain Madness, ran its operations. We waited for

hours, fearing the worst. And then the call came. Scott Fischer had died on his way down the mountain. He had two small children, a wife, and scores of friends. “There is no solace in the adage that ‘at least he died doing what he loved, ’” Firman told me, “It sucks and it will happen.” Firman reckons that he loses about two friends a year to climbing-related accidents.

For his part, Samson, who has two small children, says the deaths of friends is always startling, but it does not, nor should it necessarily, stop him from climbing. He has scaled back some, but the enjoyment is too powerful to give up completely. Samson has climbed with some of the world’s best, including Todd Skinner, who died in a climbing accident. John Bachar, a famous American climber once said of