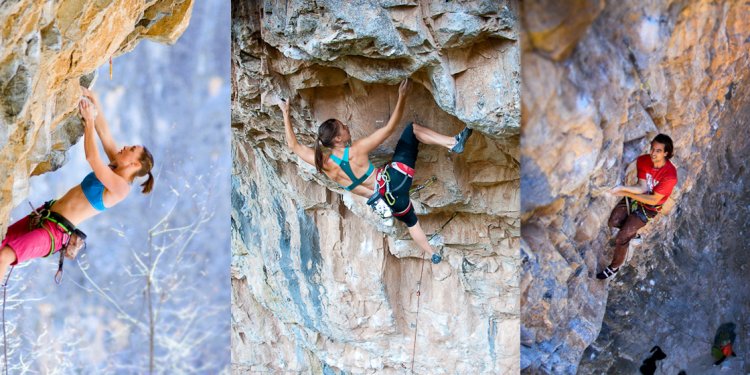 The truth is, many of those impressions and stereotypes are actually true. But once you can get past the scenesters, you will find not only a warm, genuine, friendly community of devoted sport climbers, but arguably the highest-quality concentration of varied 5.13 rock climbing in the world. Yes, there are plenty of other good routes in the 5.9 through 5.11 range. There are even dozens of fantastic 5.12s. But the routes of the 5.13-and-harder range are what distinguish this crag and make it world class. The rule that the harder the route is, the better it gets generally holds true in Rifle.

Over 400 routes, good camping, and relatively cool, summer climbing conditions thanks to 7, 000 feet of altitude and a fair amount of shade draw skinny-legged sport climbers from around the world each summer. Many come with long tick lists, but few leave having checked off more than one or two lines. Only the strong and determined survive.

Everyone has the same first-day experience in Rifle. It goes something like this: You drive through the canyon, passing by all the walls in two short miles and think, “I came all this way just for this?”

“Is that person really belaying off the hood of his car?” you then say. Yes. Yes, he is. Approaches in Rifle range from zero seconds to 20.

Ascending Living in Fear (5.13d), straight from the car.

After driving up and down the canyon two or three times, taking care not to hit the inevitable climber-dog running off-leash, and bypassing hordes of barbecuing Rifle locals blaring Mariachi music out of their pick-up trucks, you finally find a free space to park.

You navigate to a wall with a warm-up you think you might be able to do. For some reason, most people end up at the Meat Wall, with their sights set on doing two adjacent lines: Cold Cuts (5.10d) and 80 Feet of Meat (5.11a). These routes are hands down the most polished and over-chalked routes in the canyon. Because these are many climbers’ first impressions of Rifle, they believe that all other routes are just as polished and perma-chalked, which isn’t quite true … yet.

Most intermediate to advanced sport climbers stand a good chance of getting up these Meat routes, as long as their feet don’t skate out from under them on the oil-slick-black footholds.

For a third warm-up, climbers head toward the right side of the Project wall, in which you belay two feet off the road itself. Rehabilitator (5.11c), the classic Rifle warm-up, is next on the agenda. You put your rope down and watch between five and ten Rifle locals flow up this route in a quick 60 seconds. Now it’s your turn. As soon as you get on it, you quickly realize that not a single hold seems to be facing the right direction, and not only that, there’s chalk absolutely everywhere, which makes knowing which part of which chalked blob to grab, and how to grab it, seem utterly impossible. You fall, you take, you sweat. You spend the next hour or two trying to redpoint the warm-up.

OK, that was disheartening. Time for Easy Skankin’, you guess, which stands 30 overhanging meters tall and seems quite intimidating at first. Once again, you arrive to see more locals who have this route so sauced, you think they could probably climb this thing with a blindfold on.

When it’s (finally) your turn, you are surprised to find tiny holds and an in-your-face tricky sequence that spits you off at the third bolt. This thing feels desperate!

“You want some beta?” say, like, 20 people, in unison, who are the bottom of the route watching you fail.