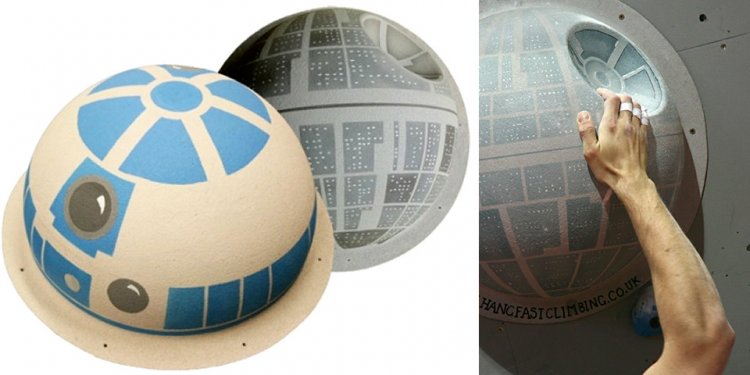 But another important aspect of developing your climbing skills is to learn the types of holds and how to use them. Climbing holds come in a huge variety of shapes from blobs to bats. Many of these shapes try to mimic real rock features while others are merely for fun. But it is not the specific shape that matters, but rather how that shape can be utilized. In fact, even turning the same shape upside down might result in a completely different type of hold.

Become familiar with the types of holds listed below and how to use them. You will surely improve your climbing just by being able to predict how to use a hold by looking at it. Plus, it will make sharing beta, or the sequence of moves, with fellow climbers much easier.

Jugs are every climber's best friend. The term basically encompasses every large, easy to grab hold. They can be held with the entire hand (and sometimes both) while requiring minimal energy. Beginner routes can be made up entirely of jugs. But even advanced routes will often have them on overhangs and roofs.

No special technique is required to use jugs. However, it can be helpful to keep your arms straight to keep them from getting prematurely fatigued. Also, don't be afraid to take advantage of the solid handhold to do a foot smear.

Just like with jugs, the most efficient way to use mini-jugs is with a straight arm and straight wrist. In most cases, the maximal length of fingers should be placed inside the hold. However, if the hold is less than one knuckle deep, it is best to put the joint directly on the lip while below the hold. This technique allows a more natural open grip (as opposed to a closed grip crimp described below) to reduce the chance of injury.

Slopers can be very difficult for new climbers but are quite a necessity on more advanced routes. They tend to have no lip or edge of any kind. Or if they do possess a featured surface, it is practically useless to get a direct grip. Slopers make up for their roundness with a rough or "positive" surface.

The secret to slopers is to get as much surface area of the hand on the climbing hold. The friction generated between the hand and the hold keeps the climber from falling off. It takes some getting used to before slopers feel comfortable and trustworthy. Slopers are best hung on from below with straight arms.

Pockets are essentially round holes that allow you to hook between 1 and 3 fingers. They vary in depth and texture but generally do not have any sort of lip.

Pinches are usually vertically oriented holds. They can share similar properties to slopers and other holds, but are narrow enough to fit the entire hand around.

Pinches require using the thumb on the opposite side of the hold to create a strong squeezing force. Of all the climbing holds, pinches usually require the greatest amount of strength. Depending on the shape of the hold, the pinch could use between 1 and 4 fingers opposing the thumb. The thumb can be used on other types of holds to provide additional holding force, but is essential for pinches.

Crimps and chips are generally small, thin climbing holds. Chips are most commonly footholds but can also be used for hands on advanced climbing routes. These types of holds are seldom found on beginner routes due to a greater need for strength and solid technique.