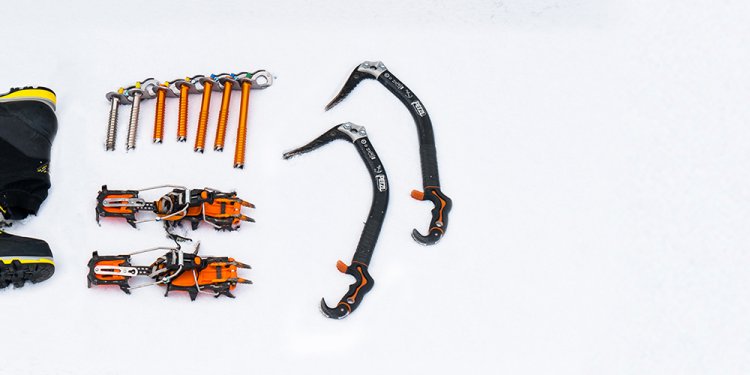 The specs on a selection of bargain ropes, circa 1999. Note how heavy and thick they were, and how cheap!


During the foundational years of climbing, a 50 meter rope was the standard. The weight of a rack then composed of oval carabiners and chrome-moly pitons limited the amount of protection that could be carried and, accordingly, the sensible length of each pitch. Modern lightweight gear has reduced this burden and allowed climbers to safely protect longer and longer pitches. For awhile, 60 meter ropes became the norm. Today, these are still the most common, and are able to get you up and down lots of routes. But their popularity is beginning to wane as more route developers place anchors that require a 70 meter rope to lower to the ground. Furthermore, among strong sport climbers longer routes are trendy and 80, 90, or even 100 meter ropes are gaining acceptance.

Our best advice to first-time shoppers is to ask your climbing partners what length is ideal for your area. At many locations, 70 meters will be overkill. Also consider the type of climbing and intended grades. Generally, difficult single pitch cragging or bold multi-pitch linking will require a longer rope, while the easier grades or more patient parties can get by with a shorter cord. For many locations 60 meters will suffice, but if you can handle the extra cost, weight, and bulk, 70 meters might allow more possibilities.


Another important factor affecting the price and functionality of climbing ropes is the marking of the middle. Easy identification of the middle allows you to quickly thread the rope before a single rope rappel, or helps you measure whether you can safely lower a climber to the ground after a single pitch lead. There are a variety of options. The most dramatic method is called bi-pattern, in which the rope is divided into contrasting patterns that are easy to visually differentiate. One common pairing is an elegant argyle with generic static fuzz. To make a bi-pattern rope, companies have to weave the separate patterns into one rope of the desired length, which takes time and increases the price.

A more affordable way for manufacturer's to mark ropes is to do it after they have woven super long lengths of one continuous pattern. Individual ropes can then be cut off of this uniform spool to the desired length. The middle of each rope is then colored in some way. We like the idea, but in practice, this mark is too often a 6" long dull black smear that wears off quickly and is nearly impossible to see on a darkly colored rope. A few companies have recognized this nuisance and are now using longer-lasting methods with brighter colors. We applaud this.

If you ever need to mark a rope yourself, be it on a cheap unmarked rope, a worn away factory smear, or an asymmetrically shortened bi-pattern, there are several effective methods. A marking pen is one of the easiest, but use one designed specifically for ropes, not any old Sharpie, which can damage nylon. This coloring will eventually wear away and need to be reapplied just like a factory middle mark. Some climbers foolishly use tape. This can jam in a belay device, or worse, slide away from the middle and dangerously change the mark. A more effective mechanical technique is to sew thread through the outer fibers of the sheath. Floss works well, although, this method can unsettle partners who haven't seen it done before.

But what do you do on the top of a pinnacle after ignoring all these options when you realize you're facing ten rappels with an unmarked rope? The answer is simple, yet unknown to too many climbers; chalk. You will still have to measure the middle when threading the rope through the anchors the first time. Then mark the middle using a small pebble of the white stuff from your chalk bag. Use your fingers to really grind it in. Separate zebra stripes help make it obvious. Be sure to reapply at every other anchor or so because it will wear off. And, as you should anytime you're rappelling, always visually watch the ends of your rope.

Ice climbing is one situation where dry treatments become important. Not only can the ice warm up and melt but the rope is often flaked directly onto the snow where it doesn't take long for moisture to soak in.


According to rope companies, when wet, a rope can lose a significant amount of dynamic strength, up to 30%. A thoroughly soaked rope also adds substantial weight. Therefore, it is definitely best to try to keep your rope away from water. Moisture, however, cannot always be avoided. Sudden rain showers, wet slimy seeps, or ice climbing in general, can all get your rope wet. To prevent a rope from absorbing moisture, manufacturers can apply a water repellent coating at the factory. Each company seems to have their own name for their proprietary treatment, but in our experience they all perform about the same. A combined core and sheath coating is superior to a cheaper treatment of only a core or sheath.

Dry treating has further advantages beyond simply keeping a rope dry. These coatings also reduce frictionboth on the surface and inside the fiberswhich decreases rope drag and extends lifespan. Generally a non-dry rope will be a little cheaper than the dry version. However, aside from exclusive use in the gym or desert, we feel the higher cost of a dry rope is justified by the performance benefits.

Any rope sold for climbing should be approved by the International Climbing and Mountaineering Federation (UIAA) and include on the packaging the scores measured for each of the few required tests. While it may be tempting to geek out on these numbers, it is most important to just know that the rope is UIAA certified. We will try to explain the tests as best we can, but for a complete explanation see the actual UIAA Safety Standards.

This test uses an 80 kg (176 lbs) weight attached to a 2.5 meter length of rope. The weight is repeatedly dropped from a height of 2.3 meter to create harsh, greater than factor 1.7, falls. The final fall rating is simply the total number of these falls a rope was able to catch before failing. These falls are extremely severe and unlikely to occur often, if at all, in a real world setting. In fact, there has yet to be a confirmed case of a UIAA approved climbing rope failing from the force of a fall alone. Therefore, as long as a rope passes the UIAA minimum 5 fall requirement, we believe this number is of little importance.

Some have argued that this number can indicate the overall lifespan of a rope; a higher number equating to more durability. While it would be convenient if this were true, in our experience ropes are more often retired from damage to the sheath (partial or full core shots), or declining handling, than from an actual reduction in strength. A good example of this contradiction is illustrated by the Sterling Nano IX and Marathon Pro. Both withstood 6 UIAA falls, but the Marathon Pro's higher weight, diameter, and massive sheath makes it undeniably more durable. To summarize, we think the fall rating number is a good a measurement of core strength, but does not tell you much about the most likely cause of retirement, the sheath.

Exploring the elasticity of the Mammut Sensor. It withstood ten falls in the UIAA's drop test and placed in the middle of the pack for impact force and dynamic elongation.


Impact force is the amount of force exerted on the weight during the rating falls, in kilonewtons (kN). The lower the number, the lower the impact will be on you during your own falls. Additionally, a smaller impact force will also reduce the load on the top piece of gear. For clipping beefy bolts this is of little consequence, but it could be an important consideration with questionable gear or when ice climbing. In practice, though, the weight and actions of your belayer can have an even greater effect than the rope on whether a catch is 'hard' or 'soft'.

The elongation is measured under two different circumstances. Static is the amount a hanging rope stretches when the 80 kg weight is added. Dynamic elongation is the length of stretch when the same 80 kg weight undergoes the first UIAA test fall. For the label, both are converted to a percentage, so a 60 meter rope with 7.5% static elongation will stretch 4.5 meters (~15 ft) under an 80 kg load. Dynamic elongation appears to be closely correlated with impact force, and the same considerations for marginal protection should apply.

The UIAA pulls 2 meter segments of rope through an apparatus that exerts pressure from multiple angles to measure the amount that the core and sheath stretch compared to each other. Sheath slippage can be an annoying real world problem as the two parts separate during rappels, creating floppy, sheath-only, ends that necessitate chopping. But we're not sure if this test is an effective way to measure it. All of the ropes tested received a 0 mm score except the Sterling Nano IX, which got 5 mm. However, we experienced no slippage on the Nano IX, only with the New England Alex Honnold Signature Bi-Pattern Glider. This mystery remains unsolved.

The 42% sheath proportion of the Sterling Marathon Pro was the highest tested. This combined with its heavy weight (63 g/m) helped it receive the best score for durability.


Although it is not a UIAA requirement, many manufacturers are now including a sheath proportion number on their packaging. This is the portion of sheath relative to core by weight. We were hopeful that this could start to provide some insight into durability, but that insight turns out to be limited.

First of all, it is too easy to focus on only the number. Take the Petzl Volta and the Sterling Marathon Pro. Both have an identical 42% sheath proportion. But the Marathon Pro weighs 8 g/m more, and this 14% heavier sheath is predictably more durable. So sheath proportion is really only useful when comparing ropes of similar weight. Secondly, as one rope designer explained to us, the durability of a sheath is affected by more than just the total amount. Yarn type, denier, and thickness combined with the carrier count, twist levels, and dye process can all have a significant impact on sheath longevity. Instead of getting bogged down with these details, we hope you will trust our testers and the overall durability numbers they've settled on after climbing with each rope.

During the testing phase of this review we spoke with many climbers about the qualities they look for in a climbing rope. By an overwhelming margin, the most common response was low price. This is somewhat surprising when you consider that we all trust our lives to our climbing ropes, literally. But the UIAA has done such a good job with their certification process that there is almost no concern of purchasing an unsafe rope. Furthermore, many performance characteristics of ropeshandling, catch, durabilityare difficult to measure or articulate, so a lot of shoppers have shifted their focus to the most tangible metric: cost. If you're a part of this frugal group, we have a simple suggestion for you.
Source: www.outdoorgearlab.com