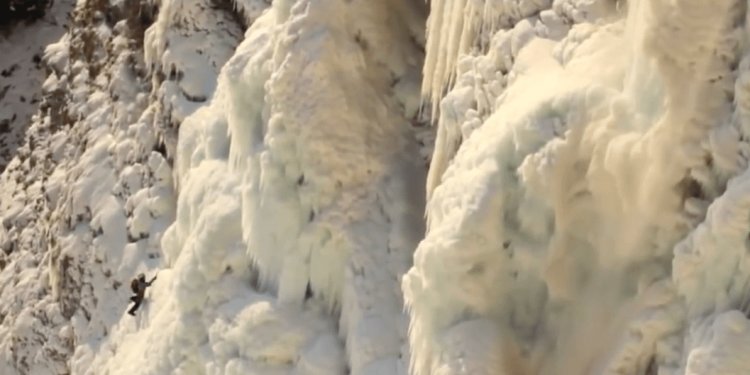 Will Gadd, the world’s best ice climber, puts up a new route on the world’s most famous waterfall.

Niagara Falls is the most famous waterfall in the entire world. The falls, which straddle the border of Canada and the United States, welcome 20 million visitors a year and are a national landmark for both countries – one of the world's first tourist attractions, and, simply put, a wonder of nature.

Plenty of people have gone down the falls over the years, but – recently named a Nat Geo Adventurer of the Year – is the first person to ever go UP the falls. How? Well, he's one of the world's best ice climbers, and Niagara Falls was frozen.

See the incredible video of the climb below

At least, Niagara was frozen enough to climb. "I checked out the spot we were thinking of climbing in the summer, " says Gadd. "You'd be swept away by the torrential downpour then." But this year's cold winter slowed water flow, allowing climbable ice to form. "On a warm winter, there's no climb here."

After working with NYS Parks Department and NYS Parks Police, Gadd and his team were able to create a comprehensive plan to ensure the climb could be done safely and the necessary precautions were taken to protect the natural environment, as he put the final touch on one of his most epic years ever as a climber. Says Gadd: “It's one of the most visited places in North America. We have to treat it as a jewel, or it won't work."

There were two priorities for the climb – ethics, and safety. "We're doing it on natural protection, " he says. "No bolts. There won't be one thing left in the ice that wasn't there to begin with, and that's the best possible way to do it." The line – which sits on the American side of the Horseshoe section of Niagara, near what's known as Terrapin Point – extends approximately 45m from bottom to top.

It's not easy ice, either. "The ice is formed in layers, " he says. "That means there's a layer of ice, then snow (with a lot of air), then another layer of ice. It's unstable, for sure.” Will estimates the grade at WI6+, as hard as it gets for this style of climbing. Tools he used include ice axes, crampons, and a specially-designed Black Diamond prototype 'ice hook.'

The day before the climb, Gadd dropped in from above to clear the route of dangerous hanging ice that could break off during his climb. "I was taking off pieces the size of small cars, " he says. After a full day in front of the route, it was ready.

The environment may appear pristine, but it's anything but peaceful. With 150, 000 tons of water flowing over the crest every minute at speeds of nearly 100kph, the water impact is equivalent to roughly 4, 000 18-wheel trucks hitting the ground at the same time. "The massive water flow constantly shakes the ground, and makes the ice shelves and walls around you unsteady and unpredictable, " says Will. "It's a harsh environment and an intense challenge to stay attached to the wall, let alone climb it."

The route starts with an intense traverse over something Will came to call the 'cauldron of doom, ' where the waterfall slammed into a hole in the ice. "If you go in the cauldron of doom, you're done, " he says. "You can hit rocks, drown, or freeze to death. Above the cauldron, he and his climbing partner, Sarah, set up a belay station in an ice cave a little smaller than a phonebooth.