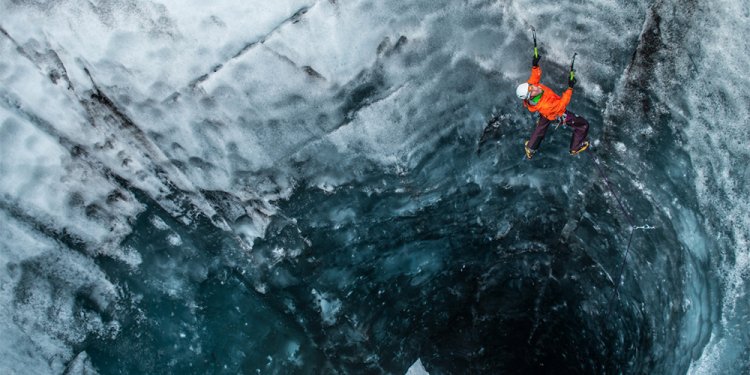 Klemen Premrl always dreamed about climbing icebergs. Two of the most accomplished ice climbers in the world, Klemen and his partner and longtime friend Aljaz Anderle (both from Slovenia) along with a production crew from GoPro went to Greenland last summer to try and fulfill their childhood dream. While the iceberg summits they hoped to reach were generally much lower than their usual climbing objectives, the challenge was a substantial one. Nobody had ever climbed icebergs like these before, and since they’re floating in the middle of freezing cold glacier water with the majority of their mass submerged, they are extremely unpredictable. Prone to cracking, collapsing, and capsizing from the smallest disturbances, any time Klemen and Aljaz were on an iceberg their exposure was at a maximum. The consequences of mistakes, miscalculation, and bad luck were most likely going to be fatal. GoPro released the film of their expedition today, and it thoroughly blew our minds. The uncertainty of every swing of the ice axe is captured beautifully from a number of cool angles along with the uncertainty and moment-to-moment intensity of the razor thin edge they are constantly on while climbing the icebergs. We caught up with Klemen to ask him a few questions about his "adventure of a lifetime."

Where were you guys sailing while looking for icebergs to climb and what type of boat were you on?
We were on a schooner named La Louise, captained by Thierry Dubois. The schooner is 63 feet long and 16 feet wide with two masts. We started our journey in Ilulissat, Greenland. It’s located in Western Greenland, approximately 120-degrees-north latitude in the Arctic Circle. With a population of 4, 541 it is the third-largest settlement in Greenland, after Nuuk and Sisimiut. In direct translation, Ilulissat is the Kalaallisut word for "Icebergs." The nearby Ilulissat Icefjord is a UNESCO World Heritage Site, and has made Ilulissat the most popular tourist destination in Greenland.

So, we started in Ilulissat and we first went just a little bit down south, to see famous Icefjord, which releases 40 million tons of ice into the ocean every day. Then we turned up North. It took us three days to reach Eqip glacier. From here we went Northeast, to check "Iceberg parking, " then we turned South, and went back on the other side of Arve Prinsens Island, towards to Ilulissat. The whole trip took eight days. We sailed here and there looking for icebergs along the way every evening we anchored our boat in a different bay, sometimes close to a village, so we were able to socialize a bit, other times in total wilderness.

It seems like there's a lot of unpredictability when climbing icebergs. What features or attributes are you looking for when choosing one to climb?
For sure, there is a lot of unpredictability when climbing icebergs. The fact that two-thirds of an iceberg is under water showcases this pretty well. We tried to learn as much as we could about icebergs before and on the trip, but the truth is, that there's no way you can figure out individual icebergs. Each one is totally different. I’ve trained my whole life to do hard and technically challenging climbing. To be able to do that type of climbing I need to recognize dangerous situations and be able to avoid them. It is how I stay alive.

Icebergs proved to be some of the most unpredictable climbing I’ve ever done. I figured it out pretty soon after climbing my first iceberg that we can only predict a small fraction of all the different factors, and because of that that it’s a lot more difficult to recognize the truly dangerous situations. At first, I was able to look at this problem as a matter of finding that fragile balance and thin line between technically and aesthetically pleasing climbs without risking it all. But after the first major incident, l realized that there is not much to hold on to in this theory, so I was forced to bring faith into the equation, and hold on to that.

But, we were able to learn pretty fast, that we need to climb on a surface that was previously melted by the sun. And I don't mean it was in the sun for a few days, I’m talking about a much longer period of time. So we began looking for icebergs that have turned 90°, so that what was once a flat surface of an iceberg, rotated and became a steep, preferably vertical wall and then we would try to climb on that.

The other thing is that you need to respect icebergs. You need to listen to them. You need to be gentle. You don't just jump on them and climb them for the sake of it. Climbing icebergs is a process of finding the right one, finding the right line, figuring out how you can approach it, and finally getting out of that boat and trying to climb it. Then, you climb as gentle as possible and you just might climb all the way to the top. But you must be prepared to back off; you don't want to push it. You need to listen to the iceberg and if it’s telling you (usually pretty loudly) that you should leave it alone, then it might be wise to slowly climb back and jump on that boat again.

What are the technical and physical challenges when climbing an iceberg?
Icebergs are made of an ancient ice; they started their life in glaciers. The thickness of the glacier is generally more than 1.2 miles and sometimes almost 2 miles thick. So that ice was formed in a really cold environment and usually under tremendous pressure. That makes sections of the iceberg’s ice very dense and hard, but also brittle, because there is a lot of tension captured in that ice. When that tension is released, it shatters, collapses, and breaks apart on a massive scale.

The hard and brittle ice was definitely a technical challenge. We tried to avoid that ice when choosing our lines to climb. We tried to avoid that hard ice because it forces you to use multiple swings with an ice axe before you get a secure placement. At the same time, every swing of an ice axe on those sensitive, brittle icebergs could accelerate their transformation and change.

So, for me, the technical challenge was to climb with as few swings (ice axe strikes) as possible and be as gentle as possible.
Physically, there was nothing really special about climbing icebergs. It was reasonably steep, but not that close to my limit. For sure, not using ropes makes any kind of climbing more demanding because there is no room for mistake.