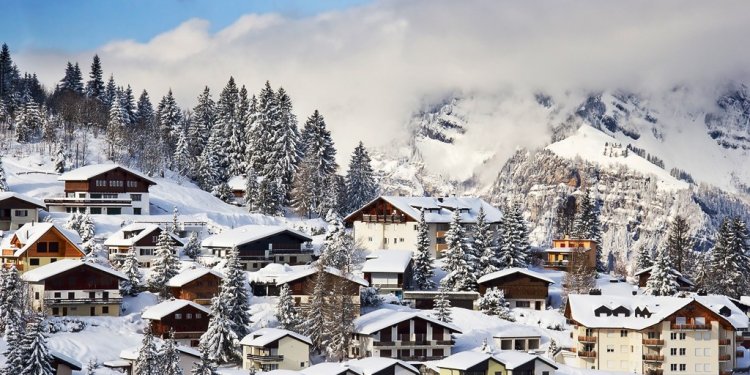 The Alps are the youngest and highest mountain system in Europe. They stretch across the western and southern part of the continent in a broad arc. The mountain range starts near the on the border between France and Italy. Then it curves north- and eastward through northern Italy, Switzerland Liechtenstein, southern Germany, Austria and Slovenia.

The Alps are about 1, 000 km long, the broadest section over 260 km wide. The highest peak, Mont Blanc, situated on the border between France, Italy and Switzerland, rises 4807 meters above sea level . Other famous peaks are the Monte Rosa, the Matterhorn, the Großglockner and the Zugspitze.

The whole mountain range is divided into three sections:

How the Alps were formed

Millions of years ago the area of today’s Alps was covered by a large sea that separated Europe and Africa. The southern land mass started moving northwards. This movement folded rock layers at the bottom of the sea. Heat and pressure transformed the rock and pushed the material upwards . Today these regions are the highest parts of the Alps. Most of the newly formed rock is granite and gneiss, but many ranges consist of limestone which also formed on the seabed.

During the Ice Age, which started about a million years ago, the Alps were covered with a thick blanket of snow. moved down valleys and made them wider and deeper. As they moved they took rock and other material with them, creating moraines. When glaciers started to melt water filled up behind these natural dams and created the alpine lakes we know today.

The largest of these glaciers is the Aletsch in Switzerland which reaches a length of about 25 km. The longest glacier of the eastern Alps is the 8 km long Pasterze, at the foot of the Großglockner.

The ice and snow of the alpine regions helped create the large rivers of today : the Rhine, Rhone, Danube and the Po.

In general, the Alps have a highlands climate. Higher areas are colder than the valleys and they get more rainfall and snow because cold air cannot hold as much moisture as warm air.

Sometimes warm dry foehn winds, blow downward along the mountain sides. The air originates in the Mediterranean area, climbs over the southern Alps where it loses almost all of its moisture and on the back side becomes so dry and warm that its melts the snow and ice . This often to a rise in temperature of up to 20 °C in the colder valleys .

Many kinds of plants grow in the various areas of the Alps. The valleys have rich, green pastures with beech and oak trees growing in the lower regions. These trees are deciduous, which means they lose their leaves each year.

The higher areas are dominated by evergreens mainly spruce, pine and fir trees. Above the tree line, which is located between 1700 and 2000 meters above sea level you can find alpine meadows, mosses, shrubs and unique flowers like the Edelweiss. The highest parts of the Alps (regions above 2 800 metres) are covered with snow, ice and barren rock.

The ibex is a sturdy wild goat that lives above the tree line. alpine marmots are thick-bodied squirrels that hibernate in burrows. The chamois is a graceful animal that looks like an antelope.

Farming is an important economic activity in valleys and on the sunny sides of the lower slopes. Small family farms are very common in alpine areas. The main crops are barley, oats and rye, as well as corn and wheat. Farmers also raise cattle, goats and sheep. Dairy farms produce milk and other products for a large part of the population. Wine is grown in sunny areas of the southern Alps up to a sea level of 600 meters.

Most of the energy comes from the hydroelectric power plants that operate either high up in the mountains or on rivers. These power stations produce enough energy so that surpluses can be exported to other European countries.