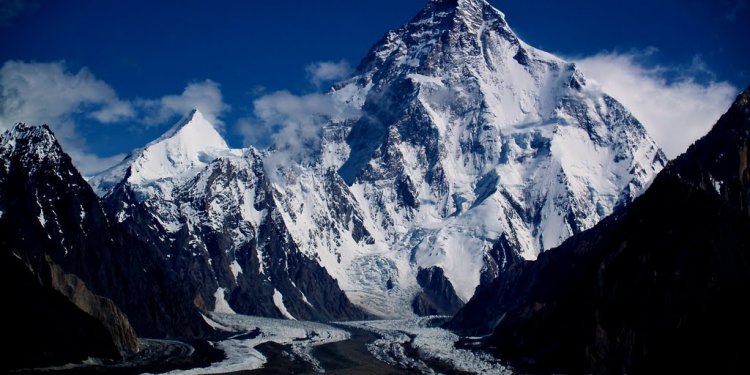 What is the hardest mountain to climb? Is it the tallest, the steepest, the one with the slipperiest rock walls or the fewest handholds? The one with the harshest weather? There are a lot of different factors that go into determining the difficulty of a climb. To a large degree, difficulty is a subjective measurement. But we can still come up with a list of challenging climbs based on a combination of these factors as well as the reports of climbers who have actually tackled these giants.

This mountain is not as well known as Mount Everest, but it is a very tough mountain to take on in the Himalayas. It wasn’t even climbed successfully until 1950, which by itself is a pretty strong indicator of its challenge level. It was the highest mountain ever climbed until Sir Edmund Hilary and Tenzing Norgay took on Everest three years later. The first team to climb up Annapurna had to find their way up as they went, and it took another two decades for another team to climb the peak. Head to Mongolia for another challenge in the form of Mount Khuiten. You’ll find this mountain at the intersection of Mongolia, China, and Russia. It may not be the highest mountain in the world (4, 374 meters), but it is located pretty far from anywhere. It’s quite a hike to get there in the first place, and there isn’t much in the way of help if you get into trouble. Because it is so remote and inaccessible, it poses unique challenges for climbers.

This mountain in the Alps can be a very easy climb or a very hard one; it all depends on the route you choose to take to the top of the 4, 478 meter peak. Novice routes can check out routes like the Horni Ridge or Lion. For a tough climb though, try one of the challenging routes such as Furggen Ridges or the North Face. Weather here can be treacherous, even during the summer. That’s why even novice climbers need to have a pretty solid grasp on what they are doing. Even the easier trails can lead to difficulties if the weather turns harsh. This Alaskan peak rises 6, 194 meters above sea level. From the base of the mountain to the summit, the elevation change is almost as great—5, 490 meters. This is considered the steepest, most sudden change in elevation anywhere on the planet, making Mount McKinley an extremely challenging climb for anyone. As with the Matterhorn, severe weather conditions make this mountain even more dangerous. These two peaks are right next to each other in the southern Andes, and both offer very challenging climbs owing to their extremely vertical cliff faces. Add to that some more unpredictable and intense weather, and you have yourself a very tough climb to either summit.

It’s hard to say whether this is the most difficult mountain to climb, but it is arguably the most dangerous one. The routes are tricky, the altitude is high, and rock slides are common. As a result, people die on this mountain every year. According to Wikipedia, around a dozen rescue missions are performed every weekend during the busy August climbing season. This mountain on the border of India and Nepal rises to an astounding 8, 586 meters. The first recorded climb to the summit was in 1955. Charles Evans stopped just short of the very peak out of respect for local religious beliefs. The first part of the climb is relatively straightforward, but the last part involves a sheer climb which is almost vertical for more than 1, 000 feet. Add to that the altitude, and you have a recipe for extreme challenge. Nanga Parbat is located in Northern Pakistan, and rises to 8, 125 meters. It is the ninth tallest mountain the world, and is widely considered one of the most dangerous peaks as well. At least 31 deaths were recorded before the mountain was first climbed successfully in 1953 by Herman Buhl. No discussion about challenging mountains would be complete without a mention of Everest. At 8, 849 meters, Mount Everest is the tallest and most famous mountain on the planet. It is one of the most challenging for precisely this reason. The altitude imposes all kinds of challenges as far as health is concerned, and the extreme cold is just as dangerous. The difficulties associated with climbing Everest became widely known after Jon Krakauer published his 1997 account Into Thin Air. The bestseller detailed an ill-fated Everest expedition which led to the author and several other climbers being stranded while eight others were killed.